For its latest exhibition, which runs until 24th March, Quay Arts is hosting Isle of Wight Hidden Heroes. Supported by Arts Council England this exhibition has been developed with the aim of (re) introducing residents to the incredible collections of the Island’s museums and galleries and to strengthen a sense of pride in the place we live in.   Hidden Heroes at Quay Arts explores and celebrates seven individuals from the 7th to 21st Century that have achieved innovative life changing or awe- inspiring things whilst on the Island. Seven Hidden Heroes are featured: John Ackroyd, King Arwald, Julia Margaret Cameron, Joe Carstairs, Isabella de Fortibus, Rev. William Fox and Andy Stanford-Clark.

Hidden Heroes octogenarian John Ackroyd (pictured below with part of Thrust) from Ryde and Andy Stanford- Clark (pictured below with Ferry Tracker) were in attendance at the opening of Hidden Heroes at Quay Arts. John was very much part of the Thrust 2 team which broke the land-speed record in 1983 at 633mph as well as designing the Enfield Electric Car in the 1970s, an example of which is on show in the West Gallery thanks to owner Barry Price. Andy is a master inventor for IMB being the UK’s Chief Technology Officer and responsible for MQTT technology. He travels to work via Red Funnel’s Red Jet and one day had the inspiration to devise a system to track all the Isle of Wight ferries. 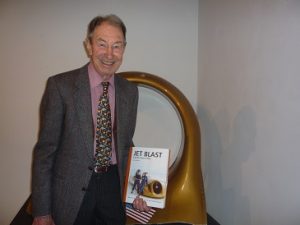 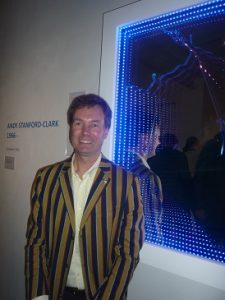 Through significant objects, loaned by the Island’s Heritage Service, museums and private collectors, and newly commissioned artworks by local and national artists, Quay Arts hopes to shine a light on some remarkable people and inspire you to nominate your own hero via the exhibition postcards.    In the West Gallery this exhibition is arranged as a visual timeline beginning with a voracious fossil hunter and ending with a master inventor by way of a pagan king, pioneering photographer, speed-racers and engineers.   Complementing the exhibition, Quay Arts are hosting talks by local historians exploring the projects headline heroes and other remarkable people.

In a welcoming address Quay Arts director Paul Armfield explained how the project came about and said how the Island had a large number of residents who could be classed as heroes in various aspects of Island life. Many had contributed to the life of the nation and the Island seemed a great place for innovation and invention. He thanked Ian Whitmore for arranging not only this exhibition but for overseeing the programme of Hidden Heroes events which will feature across the Island. Ian thanked the team of helpers who had brought the events to fruition.

Other Island venues are also hosting Hidden Heroes exhibitions including Dimbola Museum and Galleries at Freshwater Bay and the Classic Boat Museum.

In addition, Dimbola is arranging a Hidden Heroes Free Family Drop- In Workshop with Hannah George on Sat 17 Feb 10.30am – 12.30pm where, inspired by ‘Hidden Hero’ Julia Margaret Cameron, there will be the chance to use decoupage and photomontage to create beautiful images and portraits.