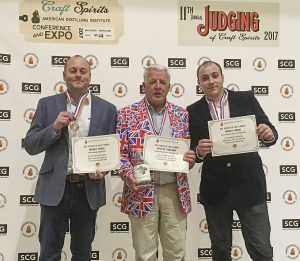 HMS Victory Navy Strength Gin, produced by the Isle of Wight Distillery, has been awarded a prestigious Best in Category accolade at this year’s American Distilling Institute (ADI) Spirit Competition. Known as the ‘Voice of Craft Distilling’ the ADI presented these internationally recognised awards at its Annual Conference in Baltimore, USA.

Founders of the Isle of Wight Distillery, Conrad Gauntlett and Xavier Baker were joined at the presentation ceremony by their marketing manager Fabian Game. After the awards Xavier commented; “We are delighted to win three awards especially Best in Category for our Navy Strength Gin, the big brother to Mermaids Gin. To win such awards on the other side of the Atlantic is a huge accolade for us. We all feel very proud.”

Association between the HMS Victory, Nelson’s famous flagship and the navy strength gin produced on the Isle of Wight has been formalised through an exclusive licensing agreement with the National Museum of the Royal Navy based in Portsmouth.

Isle of Wight Distillery’s limited edition Oak Aged HMS Victory Navy Strength Gin is ready for its second release on the 7th May, having been aged for a further seven months. This gin will be launched at a special event held on board HMS Victory in Portsmouth Historic Dockyard on Sunday 7th May 2017. (Invitation only)
The Distillery, in partnership with The National Museum of the Royal Navy, has been working to produce a unique Oak Aged Navy Strength Gin which has been aged in oak barrels, containing original oak from HMS Victory herself. This gin contains a higher concentration of botanicals resulting in a more intense flavour. The first batch was released in October 2016, with two further barrels to be released in due course.
Their Oak Aged Navy Strength Gin recreates the style of that drunk by Naval officers who served in the Battle of Trafalgar. The four barrels have been created by England’s only master cooper, Alastair Simms. This limited edition batch is now available to purchase online at isleofwightdistillery.com and a percentage of all sales will go towards the ongoing restoration of HMS Victory. The next (third) release will be in two years and the fourth release in five years on the 7th May 2021.