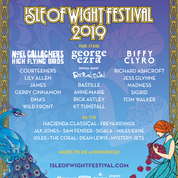 FIRST ACTS ANNOUNCED  TODAY FOR THE ISLE OF WIGHT FESTIVAL  2019, IT IS THE FESTIVAL SET TO KICK OFF UK FESTIVAL SEASON THIS JUNE.

In 2018 Girlguiding IW ran a most successful stand at the IW Festival and following last year’s 50th anniversary celebrations, The Isle of Wight Festival today announced the first artists for the 2019 event, which will take place in Seaclose Park on  13th – 16th June.

Noel Gallagher’s High Flying Birds headline the opening night, returning to the Festival for the first time since 2012. Chart-topping British singer-songwriter George Ezra will headline the Main Stage on Saturday 15th June, in what will be his first major UK festival headline performance, a huge milestone following an incredible few years for the 7-time BRIT-nominated artist. Special guest Fatboy Slim, making his Isle of Wight Festival debut, will keep the party going as he plays until the early hours following George’s performance. Scottish rockers Biffy Clyro bring their passionate and rousing live show to the Main Stage on Sunday 16th June, closing the 2019 Festival in what is sure to be an epic headline performance.

Tickets for the 2019 event are on sale Friday 25th January at 9am. Early Bird tickets which went on sale just days after, following the 2018 event, were ‘Sold Out’ by November 2018.

If you did not manage to get an Early Bird ticket here are the prices: