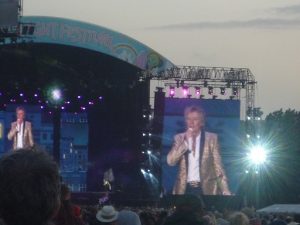 Once again The IW Festival is pledging to support emerging talent by teaming up with HOT VOX  to find a talented new artist/s to perform at this year’s festival, which takes place 21st – 24th June at Seaclose Park, Newport.

The Isle of Wight Festival ‘New Blood’ competition is open to artists and bands throughout the UK. All artists have to do to register is submit an original song they feel best represents them.

John Giddings has said, “There are so many great unsigned artists out there so this is all about discovering them. It’s fantastic to give new bands and new talent the chance to play at one of the biggest festivals of the summer, featuring legendary acts. It really is a once in a lifetime opportunity to be at same festival as The Killers, Kasabian, Depeche Mode and Liam Gallagher. Every band in the country should be putting themselves forward for this!”

Only the most talented submissions will go through to the Live Rounds where artists will be judged by music industry experts based on their musicianship, songwriting and fan engagement. This means the winner of each Live Round is chosen based on pure talent and quality.

The Live Rounds also guarantee that all artists who perform have the opportunity to play in front of industry professionals, giving them significant exposure on a globally renowned platform. However, the Industry Pick isn’t the only way to make it through to the Grand Final. The fans will also get a vote at each gig, helping their favourite artist progress through to the next round to be in with a shot to play at The IW Festival.

Those lucky enough to make it through the quarter and semi finals will perform in one big Grand Final on May 27th at O2 Academy, Islington, where special guest judges will pick their overall favourite act who will be crowned the winner and get to perform at this year’s festival. The competition is also open to artists nationwide with an additional online voting element. Acts simply need to encourage their fans to vote for them online using their artist profile at www.hotvox.co.uk/artists. The artist with the most votes will be fast-tracked straight through to the Grand Final.

This year’s competition is also being supported by ReverbNation so not only does the overall winner earn a slot at this year’s festival but all semi finalists will win three months free membership to ReverbNation. On top of this, all artists that make it to the Grand Final will be invited to join ReverbNation ‘Connect’ an exclusive artist development programme.

This year will also mark the 50th Anniversary of the Isle of Wight Festival. The first event in 1968 put the festival on the map as it then grew to become world renowned for iconic performances from artists such as The Doors, The Who and Jimi Hendrix in his last ever UK show. The festival was successfully relaunched in 2002 to become one of the most exciting weekends of the summer, continuing to build on its proud heritage with show-stopping headliners such as Foo Fighters, The Rolling Stones, Paul McCartney, Coldplay, Rod Stewart (pictured above in 2017) and Fleetwood Mac.