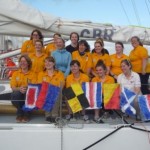 With a crew of Girlguiding members taking part in this year’s Rolex Fastnet Race a number of Islanders have shown their support for the crew who call themselves the ‘Fastnet Divas’.
Having had to undertake three qualifying yacht races The Cervantes Trophy, Myth of Malham Race, and The Morgan Cup all organised, as is the Rolex Fastnet Race itself, by the Royal Ocean Racing Club (RORC) and all of which started from The RYS Line in Cowes the crew has got to know the Island well over the past few months and were thrilled with the local support when they arrived to take place in the Rolex Fastnet Race.

Naturally there was support from Girlguiding IW in the form of local Brownies, Guides and Guiders. 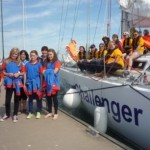 Some were able to visit the yacht, Challenger3 which belongs to the Tall Ships Youth Trust, whilst others headed for the RYS to join the crowd waving the race off. 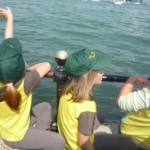 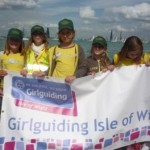 Amongst those at the RYS was Shirley Saunders one of the Island Commissioners who said, “What a great opportunity for members of Girlguiding to take part in such a well known and iconic race. This crew has worked extremely hard to raise the necessary funds for their training and the races and I hope it will inspire lots of Rainbows, Brownies, Guides and Senior Section members to take up sailing. It is the first time a Girlguiding crew has entered this race and they are one of just a few all female crews to do so. I wish them well.”
Already many of the local Girlguiding Units as well as others in the UK have undertaken ‘The Fastnet Challenge’ Badge which involved as well as understanding the race, all aspects of seamanship and things nautical. Locally Brownies have entered the Island’s carnivals as Fastnet Yachts and units from Guernsey and other units have made a tapestry depicting sea scenes and messages in flags. 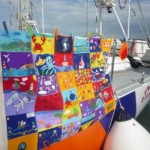 The tapestry is being carried on board Challenger 3 during the race as are other pieces of craft work made by some of the girls in the crew’s units. 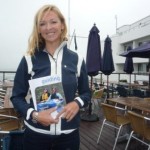 Members of the Fastnet Divas were thrilled when Shirley agreed to become their Patron and even more thrilled when she agreed to meet them on the yacht before the start of the race. Although undertaking a very busy filming schedule for the race Shirley was only too happy to visit the boat and chat with all the crew telling them of some of her own Girlguiding and sailing experiences. 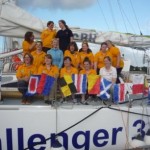 Further Island support came from the Commodore Mark Wynter and members of the Island Sailing Club. 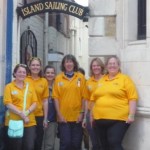 Offering the crew hospitality before the race the Fastnet Divas enjoyed the fine views of Cowes and the Solent whilst Peter Bingham Vice Commodore told them a little history of the Club and another of the famous races with a start in Cowes-The Round the Island Race which is organised by the ISC. 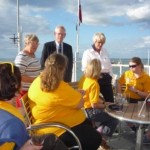 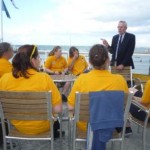 Challenger 3 is skippered by Beth Terrell who is one of a team of professional skippers who work for the TSYT which is based in Portsmouth and offers sailing opportunities for anyone wanting to sail.
Girlguiding members (Fastnet Divas) are: Hannah Nobbs, Amy Mossop, Charlotte Scoynes, Jos Baldock, Kate Felton, Jane Brooke, Tanya Trevena, Hilary Zayed and April Ulyatt. 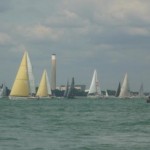