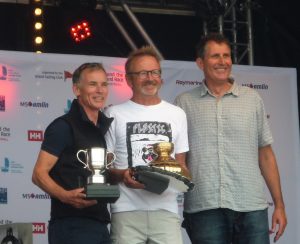 Dave Atkinson Commodore of the Island Sailing Club first took part in the Round the Island Race in 1976 and has been involved in the race organisation for some 40 years.
Prior to the race start, considering the weather forecast Dave thought there was a chance of a spectacular start this year. He also revealed that the organisation for the 2020 race (on the 30th May 2020) would be beginning on the Wednesday following this year’s race. He was pleased to say that the Round the Island Race had joined forces with the Barcolana, the World’s largest yacht race with some 2,700 boats taking part-all setting off at the same time!
Unfortunately, several French entries had pulled out when it was realised that weather conditions were against them being able to cross the Channel in time to make the start line.
Frank Fletcher CEO of the Ellen MacArthur Cancer Trust said he had been involved with the race since 2006. The trust had been the RTI official charity since 2011 and would have five yachts competing this year.
Aims of this charity were to bring young people who had suffered cancer together to experience the thrill of the RTI. Frank said that after the race they would all end up in East Cowes recalling their race performance over a fish and chip supper with stories expanding as the après race party went on.
Simon Rowell is the meteorologist of the GB Sailing team and he said, prior to the race, that there would be a reasonable breeze for the first 4-5 hours. There would be an ebb tide at the start but into the race there would be a shift of wind direction from SE to SW.
On race day 51 different classes set off from Cowes in 11 time slots between 7.30 am and 9.10 am. Actor Michael “Foyle” Kitchen officially started the race before climbing aboard his own boat to compete in the race.
This year’s race left competitors frustrated as slow progress was the order of the day despite the, as predicted, fast start and rush to the Needles. Those not racing could visit the Event Village which was on Cowes Parade showcasing some Island produce.
Witness the pedestrian elapsed time of 7hours 34 minutes for the first multihull, the 100 foot ‘Actual Leader’ skippered by Frenchman Yves Le Blevec which came home at 3.04pm.
It was almost 90 minutes later before Sir Peter Ogden brought home the IRC Class Zero mini-maxi Jethou resplendent with her pink spinnaker billowing, to take monohull line honours. 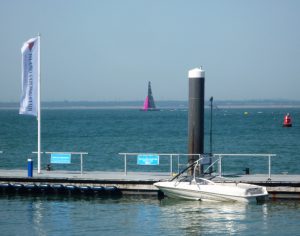 Jethou’s elapsed time was 28 seconds after the nine- hour mark was passed.
It was Sir Peter’s first RTI appearance in a decade and it proved an eventful race. Achieving a top speed of 20 knots just two minutes into the race off Ventnor the boat hit a lobster pot and then had a battle with the leading multihull. Sir Peter considered the stretch between Ryde and the finish as the most exciting.
Just after Jethou finished the predicted wind change kicked in. However, this was not from SE to SW but to East and the wind speed dropped to 10 knots or less with more and more yachts retiring.
Whilst waiting for friends and family to finish the race there was the opportunity for the competitors who had finished, together with others interested in marine art, to attend a reception at Kendalls Fine Art where they could view the art at their leisure.
By the finish of the race, with its cut-off time at 10pm, 744 boats had retired and 280 boats had finished with just 80 of these before 9pm making for a very busy time for the time-keepers in the last hour of the race.
Dozens of trophies were presented at the prizegiving with Cowes resident and World- renowned sailor Brian Thompson handing them out. This race has a tag ‘Race for All’ and there certainly seemed a prize for all with dozens of competitors taking awards.
Kevin Downer’s IRC 3 Mini Tonner Ziggy was second overall and therefore secured the Silver Roman Bowl.
Jo Richards has been trying to win the top prize, the Gold Roman Bowl, for some years, but is no stranger to success. A renowned yacht designer he won Olympic Bronze in 1984 in the Flying Dutchman class with Peter Allam.
With the Gold Roman Bowl now his with his win with his crew on Eeyore, an Alacrity 18 Bilge Keel based in Cowes, in his acceptance speech Jo said that the day’s racing had proved value for money with a whole day on the water. He believed he had broken his own record for the most cups of tea whilst going round the Island.
Jo is a member of Gurnard Sailing Club and Cowes Corinthian and Eeyore, which circumnavigated the Island in 13 hours, 36 minutes and 31 seconds, at 18 foot was the smallest boat in the race.