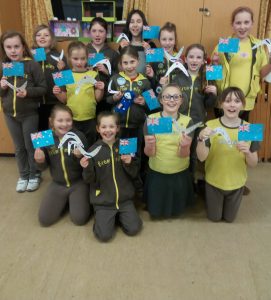 With Australia Day on the 26th January members of Girlguiding Isle of Wight decided to not only think of their fellow Guide sisters in Australia but to support them financially so that homes and meeting places can be rebuilt once the bush fires have stopped burning.
Although there are now several appeals for the Australian Bush Fire Disaster not only in this country but in other countries too, the members of Girlguiding here thought that raising funds specifically for Guiding members would be a more direct way of helping.
Some units of Rainbows, Brownies, Guides and Rangers on the Island undertook special activities such as tea and cake or coffee evenings. Others, such as 10th Newport Brownies (pictured) with the agreement of parents, donated their weekly subscription monies.

Brownies belonging to 10th Newport also learned more about Australia with flags and boomerangs whilst at Sandown, the Brownies,  made paper koalas as well as raising £65 for the Australia fund. 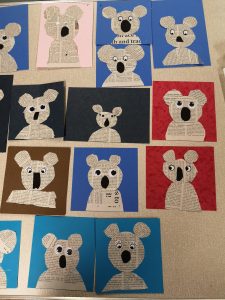 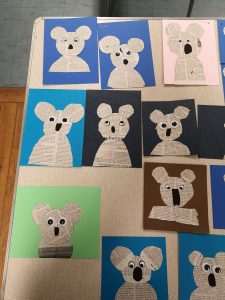 One of the Island’s Commissioners Lesley Clifford said, “During this major disaster we have all been thinking of the girls and their leaders in Australia. Although we have heard that in some areas it has been the members of Guiding who have been helping in their communities by volunteering with the running of emergency shelters for those who have lost their homes and assisting at First Aid posts we are sure that once the fires have passed the full damage to Guide Unit buildings and homes of some of the members will need rebuilding and this is why we have decided to launch this appeal.”
Girl Guides Australia have issued the following statement: In local communities Girl Guides have and continue to respond in various ways including opening Guide properties to provide a place of refuge for those evacuated from fire zones; collecting and packing water, food, clothes, bedding and supplies for those in need; preparing care packs for firefighters; and making animal wraps.
It has been heartening to have supported some koalas to find a new home in some gum trees on Douglas Scrub, a Girl Guide property in South Australia. In the wider community many have been making donations and providing financial support.
Any members of the public on the Isle of Wight who would like to add to our local fundraising can donate via their local units (60 across the Island) or use ‘contact’ via this website.