Margaret Finlayson of Carisbrooke has recently been presented with an ‘Island Award’ for services to Girlguiding IW by Island Commissioner Shirley Saunders.

This event took place at Margaret’s home whilst members of Newport Trefoil Guild, of which she is a member, were enjoying a BBQ and get-together for members and friends. 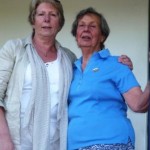 Over the year’s Margaret has hosted this annual BBQ and in the past has opened her garden for Guide Fetes and other Girlguiding activities. Margaret was not only presented with this award for her hospitality over the years but for her long service to Girlguiding on the Island having been District Commissioner for Carisbrooke in the late 1970s and a Girlguiding IW County Vice President.