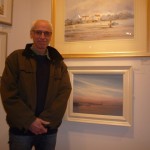 Well-known Island artist Martin Swan was elected to the role of Vice President of the Royal Society of Marine Artists at their recent Annual General Meeting in London.

Martin began his painting career as a watercolour artist specialising in landscapes and botanical paintings. He developed a keen interest in marine painting which resulted in him regularly exhibiting in the Royal Society of Marine Artists annual exhibitions.

He was invited to join the Society as an Associate Member in 2003 and became a full Member in 2005. Martin was subsequently a Steward and fund-raiser and recently served as the RSMA Education Officer, a position he continues to hold.

Martin said “I was surprised and delighted to be offered the Vice Presidency of the RSMA. I’m looking forward to continuing the Society’s excellent work and I’m particularly keen to encourage new and emerging artists to join us. It’s fitting that several Members of the RSMA live on our beautiful Island with its wonderful coastline and important marine history.”

Martin’s work can be seen at “Wayzgoose‟ the annual winter event held in the Jubilee Stores on Newport Harbour on Saturday and Sunday 28th-29th November. He will be joining other well-known Island artists and makers including potter Andrew Dowden at this Christmas Art Fair. Martin will have a selection of his paintings, including some new landscapes, for sale and will also be showing his work at Brading Roman Villa and Quarr Abbey next year, in addition to a number of the Royal Society exhibitions on the Mainland.