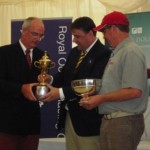 Following the races on Sunday and Monday and with the Irish in the lead, the long off-shore race, which is the highest marking of the whole event, set sail on Tuesday morning.

When the course was set the boats were sent west out of the Solent, passing the Needles Fairway buoy then down to a ‘virtual mark’ 26 miles northeast of the Cherbourg peninsula, before returning north to the New Grounds Buoy off the Nab Tower, then on to the Bembridge Ledge buoy and leaving No Man’s Land Fort to port before the finish line south of Gosport’s Gilkicker Point.

After some changes in wind, during the main part of the race, as forecast, the wind did drop and veer into the north as the boats sailed back towards the Nab Tower. However, it never disappeared altogether and pre-race fears of a night spent off Bembridge proved unfounded. This allowed crews to sleep in their own beds rather than spending a night at sea and most boats finished by midnight.

Following this long race there was a few hours rest before the teams set off again but day four was one Principal Race Officer Stuart Childerley and his team would prefer to forget. With little wind shifting and holes in the wind attempts were made to race with start lines changed but to no avail.

There followed a long wait for the boats in the Solent but eventually racing was halted for the day.

In contrast to the frustration of the previous day’s two unfinished races, three inshore races were successfully held on Thursday bringing the Brewin Dolphin Commodores’ Cup back on schedule.

Teams were worried about the Round the Island Race on Friday because of the lack of wind on some of the other days. Perhaps some remembered the long day of the JPMAM Round the Island Race back in June. However, the Race Committee stuck to the schedule and sent the nine 3-boat teams on a course anti-clockwise around the Isle of Wight with the start at 09:30 BST from the Royal Yacht Squadron line.

As they rounded St Catherine’s Point they sailed into no wind and a building adverse tide. Several boats touched sand or worse, rocks, the worst affected being the star of the Irish team, Anthony O’Leary’s Ker 39 Antix, which upon arriving back in Cowes had to be hauled out of the water for repairs.

With the course shortened, finishing at Bembridge Ledge, there wasn’t enough track left for the big boats to recover and the smallest boats topped the results. Ireland had retained the majority of their points lead and went into the final day’s race, a double points scoring race, with a comfortable 94.5 margin over the French.

First across the line in an actual time of 8:19:48 was Catapult representing Ireland but the handicap system demoted her to 17th place. Conversely, Yeoman of Wight finished in a corrected time of 9:36:59 stealing victory for GBR Blue.

So it was Ireland, making a comeback after winning in 2010,that won the Brewin Dolphin Commodores’ Cup. This year they returned with a vengeance finishing the regatta on 268 points, with an unprecedented lead of 173.5 points. Catapult, owned by American Mark Glimcher was the best performing individual boat.

At the prizegiving held at the RYS guests were welcomed by Eddie Warden-Owen CEO of RORC and the Admiral of the RORC Andrew McIrvine referred to the regatta as the most amazing event but that the weather was more taxing. Prizes were presented by Stephen Ford, Head of Investment Management at Brewin Dolphin.

Anthony O’Leary and the other skippers /owners of the Irish boats received The Commodores’ Cup together with other prizes they had won during the week so it was a case of ‘Irish Eyes Are Smiling.’ Although used for this RORC event The Commodores’ Cup trophy belongs to the Island Sailing Club and is generously made available to the RORC by the Island Sailing Club. Included in the guest list for the prizegiving were the Commodore of the ISC John Dudley and his wife Jenny.

The next Brewin Dolphin Commodores’ Cup is to be raced in 2016.