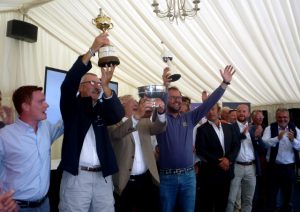 As announced earlier, the Cowes-based championship will be held from 8-16th June and will follow the successful Commodores’ Cup race format, with a variety of different courses ranging from inshore, coastal and offshore – 10 races in all using the Spinlock IRC rating system.

The RORC has instigated a new format to include the Commodores’ Cup, a Corinthian team-based event within an IRC fleet racing championship which is open to amateurs and professionals. New for 2018 are the following:

Most active and competitive IRC racing boats fall into the rating band 1.00 to 1.27. This fleet has had its own European Championship held at various racing venues. In 2016 it was held in Cork, Ireland and in July 2017 in Marseille, France. For 2018 the IRC European Championship will take place in Cowes, and incorporate the Commodores’ Cup. It is expected to attract up to 100 individual entries over the nine-day period (8-16 June 2018).

The Commodores’ Cup is a national 3 boat team event that started in 1992 as the Corinthian version of the Admirals Cup. In its early years it attracted teams from all over the world but in recent years teams from Northern Europe have contested a regatta that has a strong mix of inshore and offshore racing. The fact that it has continued for 13 editions spanning 26 years and thrived whilst all other international team events have died is testament to its highly Corinthian ethos.