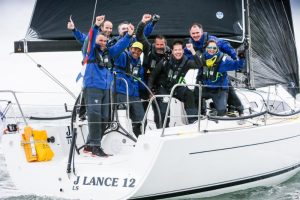 Day one and with such light winds forecast, the Royal Ocean Racing Club’s on-the-water officials, led by PRO Stuart Childerley, did well to allow crews to complete one race. Unfortunately the 5-7 knot wind all but disappeared just prior to the final IRC Two and Three boats finishing. After sending the fleet back to port, the PRO called it a day just before 1500 BST making for just the one race held on the central Solent on Sunday.

Seven three boat teams emerged to compete in this year’s Commodores’ Cup, being scored jointly with the IRC Europeans. After one race it was close, with the Celtic Team (Shaitan-Adventurer-Keronimo) tied at the top with Lastminute.EU (Hansen-Fargo-Juno) and just one point ahead of Haribo (Oui-Tilt Racing-Selma Racing). The Celtic Team, supported by Aberdeen Standard, benefitted from podium finishes by both Adventurer and Keronimo.

The race around the Isle of Wight got away on time at 0930 BST on Monday from the Royal Yacht Squadron line but just under two hours later the wind died and the race was abandoned. All the boats returned to Cowes Yacht Haven but with more wind later in the day two round the cans races were held in the central Solent near the Brambles Bank.

The Celtic Team, managed by Jock Wishart established a lead in the Commodores’ Cup despite the First 40 Adventurer, Wishart is campaigning, suffering a set- back when the Southampton Water pilot boats prevented her from passing ahead of a container ship as it navigated its way out of the Solent.

Tuesday saw another light wind tricky day with strong tides. A lengthy round the cans course in the central Solent was just completed before the wind shut down. After a wait, the skies darkened, the temperature plummeted but the wind lasted just long enough for a single windward-leeward race to be held for the three classes.

In the Commodores’ Cup, Jock Wishart’s Celtic Team managed to build itself a cushion on day three of the competition reaching 19 points in front of Kings High, comprising the two King 40s, Nifty and Cobra, plus Mike Bridge’s Elan 37 Elaine racing in IRC Three.

Later a change of schedule for the remaining four days of the IRC European Championship and Commodores’ Cup was announced with the offshore race, originally due to take place over Wednesday-Thursday now replaced by a race around the Isle of Wight on Thursday.

Despite a scary-looking forecast the rescheduled race around the Isle of Wight proved a great success with all competitors returning to a summery looking Cowes, very different to the rain, near gale force gusts and reduced visibility of the morning’s start.

In IRC Two there was a new player with Tom Kneen’s JPK 1180 Sunrise. Sailing her in more than 10 knots for the first time, they glimpsed her potential: “It has been a painstakingly stressful and difficult week. We’ve not had any conditions that have suited the boat at all…until today,” said Kneen. “We had an amazing race. I am very pleased. It was perfect conditions for the boat.”

Overall, Aurora now led IRC Two but the top six boats were within 8.5 points of her and in IRC Three leaders Shaitan and J Lance 12 were especially impressive, finishing among the IRC Two frontrunners.

With just one day of racing left, on Friday, In IRC Three, J Lance 12, the J/112e of Didier Le Moal added two more bullets to her scoreline as did Mike Bartholomew’s Tokoloshe II, the runaway leader in IRC One whilst also in IRC One the MAT 1180 Tschuss of US-based German Christian Zugel had a good day scoring a 4-3, propelling her up to fourth place overall.

At the end of the championship the immaculately sailed J Lance 12 was crowned IRC European champion for 2018.(Pictured above) The French J/112e skippered by Didier le Moal seemed never to put a foot wrong in the latter stages of this regatta.

In the Commodores’ Cup Keronimo being top scoring IRC One boat on Saturday made up for the mixed-results from her Celtic Team team mates – Shaitan and the First 40 Adventurer. They scored 12-4 and 4-22 respectively in the day’s races. However, this confirmed Commodores’ Cup victory for the Celtic Team with second place going to GBR-RORC- with La Réponse, Sunrise and Redshift Reloaded. 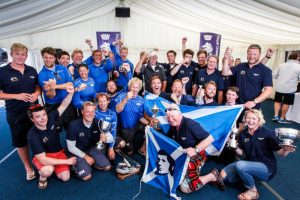