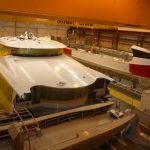 This ship will be named by HRH The Princess Royal at a special ceremony alongside Trinity Landing off Cowes Parade, followed by lunch at the Royal Yacht Squadron for invited guests.

Kevin George, Red Funnel’s CEO said “We are delighted that HRH The Princess Royal has agreed to name Red Jet 6 on 4 July. This ship is the first of her kind to be built in Great Britain for over 15 years and it is only fitting that the naming ceremony will take place in Cowes”.

Red Jet 6 entered the water for the first time on the 25 May and will remain alongside at East Cowes during the commissioning of equipment and systems. Sea trials and crew training are scheduled to commence in mid-June.

Red Jet 6 will be Red Funnel’s largest and most innovative high-speed vessel yet, offering ground breaking levels of passenger comfort, reliability and safety. She will also be the greenest ship in Red Funnel’s fleet with a host of design features to reduce running costs and protect the environment in line with the company’s ISO 1400:1 accreditation. 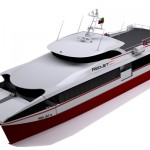