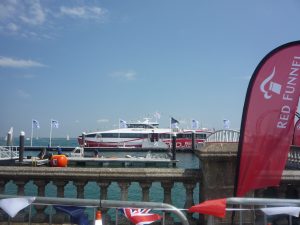 Red Funnel’s new Hi-Speed flagship has  been named Red Jet 7 by HRH The Duchess of Cornwall  in Cowes. 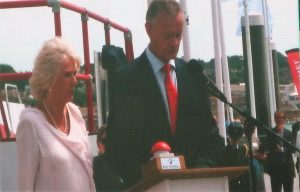 Kevin George, Red Funnel’s Chairman said: “We would very much like to thank HRH The Duchess of Cornwall for naming Red Jet 7. It is only fitting that the naming ceremony took place in Cowes where the boat will be a very frequent visitor and in sight of where she was built in the ‘Union Jack’ building home to Wight Shipyard Co. Red Jet 7 represents another significant investment by Red Funnel in marine manufacturing on the Island and the team at Wight Shipyard Co can be extremely proud of not only building a ship of such high quality but also for delivering her on time and on budget.”

The Right Reverend Christopher Foster Bishop of Portsmouth blessed the new ship before HRH The Duchess of Cornwall broke a bottle of Isle of Wight produced Rosemary Vineyard Sparkling Wine  on Red Jet 7’s bow and unveiled a commemorative plaque.

Held at Trinity Landing the ceremony was attended by civic dignitaries, invited guests and members of the public.  Children from local schools  were very happy when the Duchess spoke with them in response to their cheers and flag waving. 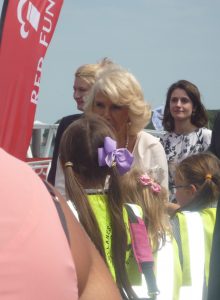 After the naming ceremony events included an hour long early afternoon excursion aboard Red Jet 7 for members of the public and media. 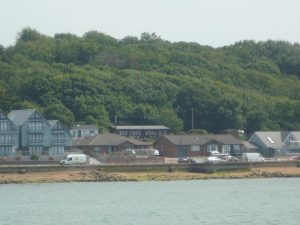 Under the command of Captain Tom off Cowes the vessel displayed her manoeuvrability before heading for Newtown Creek. On the return journey there were great views of the Island including Thorness Bay and Gurnard as well as glimpses of some of the yachts taking part in the Cowes Classics Regatta.

Red Jet 7 was built in East Cowes by Wight Shipyard Co and represents a £7m investment by Red Funnel in its Southampton-West Cowes route. Despite fierce international competition, the contract was awarded to Wight Shipyard  Co following the huge success of sister ship Red Jet 6 which was also built at the same yard in East Cowes in 2015. Some 85 skilled Island craftsmen have been employed during the build including several apprentices. 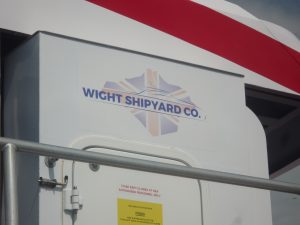 This new vessel is the Greenest Red Jet in the fleet – 4 tons lighter than Red Jet 6 which aids manoeuvrability, improves fuel consumption and further reduces emissions and wash. There are two fuel tanks onboard- one fore and one aft. each has a capacity of 3,000 litres and they are never full because the extra weight would require the use of more fuel. refuelling usually takes place on the terminal after six trips. On the afternoon excursion about 400 litres of fuel was used.

On board Red Jet 7 there are 275 comfortable high-back leather seats plus space for four wheelchairs and ample amounts of luggage. USB charging points for phones and tablets have been fitted to all window seats and there are two toilets. 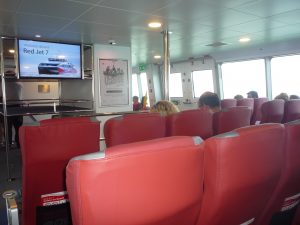