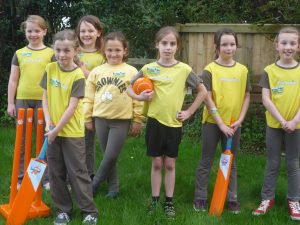 Rainbows and Brownies from the Wootton Units were some of the first youngsters on the Island this year to enjoy the chance to learn about the game of Cricket.

With the England Women’s Cricket Team having won the Women’s Cricket World Cup in 2017 and through this the BBC Sports Personality Team of the Year 2017 it was only fitting that the girls should be able to try the game.

Thanks to Stuart Chatfield from All Stars Cricket all the Rainbows and Brownies were able to learn ball skills and test their aim at hitting the cricket stumps. Quick -fire ball skills were also practiced with the girls taking on the leaders.

Stuart demonstrated several Cricket playing techniques to all the girls and showed the equipment that could be theirs if they choose to join in the All Stars scheme.

8 Island cricket clubs across the Island are hosting the scheme from next month for an 8-week programme. It is hoped that over 300 5 to 8-year-olds will be experiencing cricket for the first time through this programme.

All Stars Cricket focuses on introducing children to the game in a fun, safe and inclusive environment.

Brownie Lizzie Dodds (8) said, “ I attended All Stars Cricket at Arreton Cricket Club last year. All Stars is aimed at younger people interested in Cricket. We learned lots of skills and ways to play the game. I hope to go back to All Stars this year.”