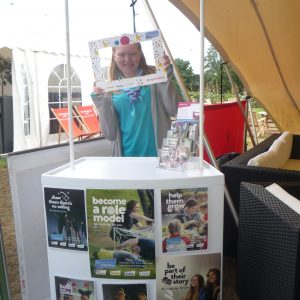 Through August  some members have been out and about with the  Girlguiding pop-ups and once again the  big posters in bus shelter campaign have been well spotted.

Despite the stormy weather and even the cancellation of the yacht races in the Cowes Week Regatta members of Girlguiding IW took the pop-up to Northwood Park on Sunday 11th August. Ranger Coral Hatcher (pictured) joined the team and was ready with her Instagram frame.

Two days later Coral was on hand again this time for finger-painting and a cup game. This time she was joined by Rainbow leader Helen Watson as well as other helpers. There was a steady stream of people through the park and several children enjoyed the activities including some girls who were already Rainbows and Brownies. By the end of the session three new Rainbows had taken the registration information away with a view to joining as had three new Brownies. However, one of these new Brownies, although she spends some time on the Island with her grandparents, lives in Swansea so there is a new Brownie on the way for Brownies Cymru. 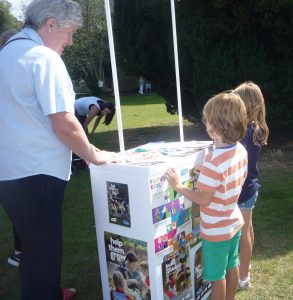 On the 18th August two members displayed the pop-up at the Startt/Finish line of the IW half-Marathon at Ryde.  Lots of the 400 runners were female and several took the information cards. Others either teach or work in Island schools and promised to place the Girlguiding IW information in their respective schools.

As well as having the pop-up the members joined in helping on the end of race drinks station and were rushed off their feet serving drinks to the thirsty runners who had completed the 13.1 miles.