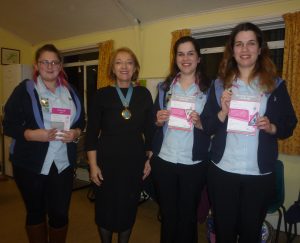 On World Thinking Day Rainbows, Brownies, Guides and Rangers speak out about issues which affect them and their local community, fundraise for causes they care about and learn about other countries.

This year’s World Thinking Day theme was leadership, inspired by the girls who kickstarted the Girl Guides when they took action 110 years ago. Frustrated by the lack of a girl-only organisation, a group of girls visited a Boy Scout Rally at Crystal Palace in London and asked Lord Baden-Powell to create a girl-led space for them.

To celebrate World Thinking Day (WTD) several Island units held special meetings filled with activities and remembering Girlguiding around the World but for 10th Newport Brownies there was a special treat with a visit from the Island’s High Sheriff Gioia Minghella-Giddens.

Not only was WTD celebrated but two of their leaders were presented with Chief Guide Awards by Girlguiding IW Commissioners Shirley Saunders and Lesley Clifford. 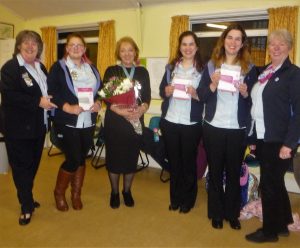 Achieving the Chief Guide Award were Charlotte Harris and Sarah Harris. Over a period of several years they have both undertaken: International trips, Charlotte to Finland and Sarah to The Netherlands; completed 1st Aid and Girlguiding leadership qualifications;

volunteered at Red Cross and Hospice shops: were Confirmed into the Church: took part in themed Ranger evenings and did outdoor cooking using a box oven.

Another large undertaking was setting up their own business with their performing and singing as ‘Double Take’. After finding their voices when they took part in a SW England Girlguiding Region singing competition it led them to joining Wight Strollers, competing in the IW Music, Dance and Drama Festival and gaining a grade 4 singing exam. Currently they are working towards grade 5.

Charlotte said, “The singing has been the most rewarding thing, giving us self-confidence and a passion for entertaining.”

All the Brownies were pleased to welcome the Island’s High Sheriff to their meeting but friends of 10th Newport, including the unit’s first member, were welcomed too. Gioia congratulated the Chief Guide Award achievers and others receiving awards saying that all the Brownies were the citizens of tomorrow and by having their Brownie leaders as role models they too could be leaders in the Island’s community. Leadership plays a big role in good communities and is something for younger people to aspire for.

Following the presentations everyone enjoyed songs performed by Charlotte and Sarah and candles were lit to remember Guides around the World.

Also receiving her Chief Guide Award on the evening was Harriet Townsend former Ranger and now leader of 11th Newport Guides. Harriet said, “When working towards my Chief Guide Award it was nice to work towards the different octants just by doing things I would normally do, for example learning to drive my car. The programme was undertaken over several years and was nice as it suited everyone differently. It was nice to be able to pick up and put down the various octants and then be able to come back to them after busy periods.

It was also nice to see what everyone in the Ranger Unit had done towards their award and talk about this and share ideas.”