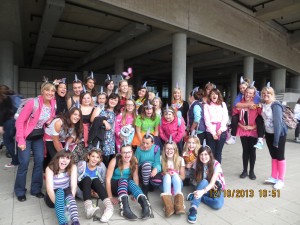 Guides from across the Island had a day to remember as they headed to London’s Wembley Arena on Saturday 12 October to see a pop line-up perform at Girlguiding’s BIG GIG 2013.
All the girls were thrilled to see some of their favourite pop acts, including Little Mix, Union J, Conor Maynard and Katy B, at the exclusive Girlguiding event. Joined by 23,000 other Girlguiding members from across the UK, the girls made it a day to remember even though it made for early morning starts from the Island.
Leader of 1st Ventnor Guides Julie Hudleston said “It was a fantastic concert. The acts were brilliant but as well as that, I get so much pleasure from watching the girls enjoying themselves. I love the atmosphere of the whole arena filled only with members of Girlguiding. That is really awesome. It’s so rewarding volunteering with Girlguiding – everything the girls experience, the volunteer leaders experience, and who doesn’t love a good concert. The more volunteers we have, the more girls get to go.”
Julie’s favourite act was Union J.
Across the UK none of this would have been possible without the volunteers who lead the groups of Guides.