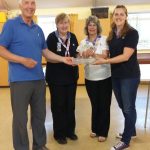 Fliss Harris leader of 10th Newport Brownies organised the event at St John’s Community Centre in Newport at which £220 was raised for the appeal which aims to raise enough money for the building of a new community hall.

This fundraiser included a fantastic entertainment from the Brownies ranging from singing, dancing, skits and more. Refreshments were served and there were games and a raffle at the event which was supported by the families and friends of the Girlguiding IW members as well as members of the church community.