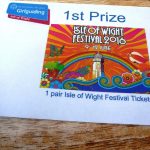 With the first prize of 2 IW Festival Weekend Camping Tickets plus a number of other prizes there was much interest in a Raffle organised by Girlguiding IW. Tickets had been on sale for just a few weeks since Girlguiding IW had been one of ten chosen IW charities to receive the tickets from IW Festival organisers. Over 100 IW charities had applied for the tickets and Lesley Clifford one of the Island Commissioners for Girlguiding commented,” We are very lucky to receive the tickets. They made for a great 1st prize for our raffle and dozens of people have been keen to try and win them.”

Taking place at Brown’s Golf Course Cafe, Sandown the draw was overseen by visitors to the Island who drew the winning tickets. 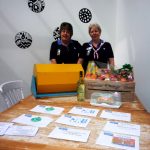 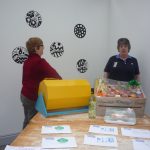 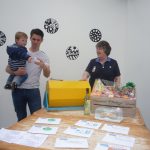 In total the sum raised for Girlguiding IW (which is a registered charity) was over £1,000. All prizes are being distributed to the winners.

Shirley Saunders joint Island Commissioner added.” We would like to thank John Giddings and others from IW Festival for their donation of the tickets, Wightlink for their continued support and the other Island businesses which included JR Zone and Barrow Boys for their contibution of prizes

This support from the public will help Girlguiding IW to grow.”