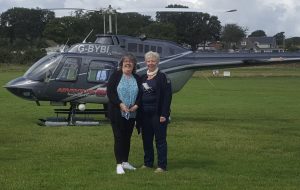 At a presentation to them at a Girlguiding World Thinking Day event in February (see item on this website) they were given a number of gifts by the members of Girlguiding IW, which included the helicopter flight tickets and vouchers for a special meal.

In way of a thank-you for their five years of leadership the 1,000 members of Girlguiding on the Island had donated to a collection organised by Carol Firth one of the Island’s Rainbow Leaders.

Having looked after the needs of the membership across the Island it was felt appropriate that a flight over the Island would be a suitable gift and this proved a great surprise for Shirley and Lesley.

However, since February, because of the present situation the flight could not be arranged but now, with an easing of the COVID 19 restrictions, flights are once again taking off from Sandown Airport.

Their special flight took in, Ryde, East Cowes/Cowes and the Bay Area.  Shirley said, “ Views of the Island were really fascinating and I was particularly pleased to see the Urban Saints area, just outside Ryde which was the site of our all Island Camp in 2019 when hundreds of our members camped together for an exciting and  fun weekend.”

As well as the flight Shirley and Lesley enjoyed a meal at Merrie Gardens.