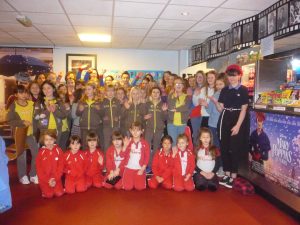 Rainbows, Brownies, Guides, Senior Section members and Girlguiding leaders from across the Island attended an exclusive Girlguiding film screening of Disney’s “Mary Poppins Returns” at the weekend. This screening was arranged by Girlguiding IW Commissioners Lesley Clifford and Shirley Saunders and was held at The Commodore Cinema, Ryde. Lesley and Shirley also arranged for all the girls to enjoy popcorn whilst watching the film.

57,000 Girlguiding members plan to attend mass screenings at the 130 ODEON cinemas across the UK but as there is no ODEON on the Island, The Commodore came up trumps.
This eagerly-awaited sequel sees British actress Emily Blunt play the magical and much-loved nanny, Mary Poppins, who after 20 years pays another visit to the Banks children on Cherry Tree Lane to lend a hand.

All the Girlguiding IW members loved the fact that they could enjoy the new film about such an iconic character with fellow Girlguiding members from across their area.
Guide Tess Bryson who attended the event, said, “I had a great time watching the film with my friends and I really loved the film. I have seen the original “Mary Poppins” and this was as good.” Sierra Townsend added, “My favourite part was when some of the characters were in bubbles- the animation was great but not too modern.”
Kerry Hiscock, (Guide Leader) said, “The girls had a great time at the special screening. It was so nice to give them the chance to do something they wouldn’t ordinarily do!”
A special ‘Mary’s Magic Movie Screening’ badge has also been produced, available for Girlguiding members to mark the event in true Girlguiding style.
Girlguiding offers girls as young as five the opportunity to be independent, learn new skills, gain confidence, make new friends and have fun.

In Disney’s “Mary Poppins Returns” Mary Poppins is back to help the next generation of the Banks family find the joy and wonder missing in their lives following a personal loss. Emily Blunt stars as the practically-perfect nanny with unique magical skills who can turn any ordinary task into an unforgettable, fantastic adventure and Lin-Manuel Miranda plays Jack, an optimistic street lamplighter.
The film also stars Ben Whishaw as Michael Banks; Emily Mortimer as Jane Banks; Julie Walters as the Banks’ housekeeper with Colin Firth as Fidelity Fiduciary Bank’s William Weatherall Wilkins; and Meryl Streep as Mary’s eccentric cousin, Topsy. Angela Lansbury appears as the Balloon Lady and Dick Van Dyke is Mr. Dawes, Jr., the retired chairman of the bank now run by Firth’s character.