Over the last few days some of our members have been busy with special activities and attending Island events. 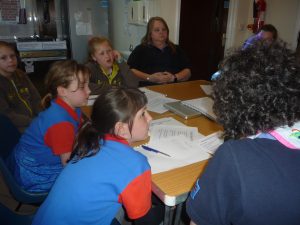 1st Carisbrooke Guides and Brownies are celebrating 100 year’s in 2019 and have a number of special events planned. In addition to this their special title of ‘ Princess Beatrice Own’ has been reinstated into their registration details.  It was first used in the 1920s when it was given by Princess Beatrice who at the time was Governor of the Isle of Wight and lived at Carisbrooke Castle.

Some of the Guides and Brownies are undertaking an Oral History project in conjunction with Carisbrooke Castle Museum and recently have been learning how to use a recording device which will record interviews with past and present members. These girls have also learned how to ask informative questions and planned what to ask the interviewees

This gallery shows the girls at the training session.

Walk the Wight with Mountbatten was a popular event recently with 8,000 walking.

Girlguiding IW members not only completed one of the walks but some served drinks and others gave out medals for those completing the half-walk from Bembridge to Carisbrooke Castle.

Carisbrooke  Brownies, Guides and Rangers were giving out the medals at Carisbrooke Castle;