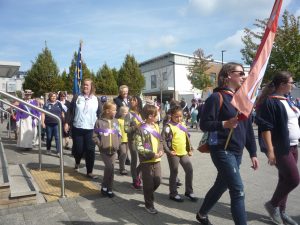 Parading through East Cowes recently were members of Girlguiding IW- Rainbows, Brownies, Guides and leaders, who had joined with members of East Cowes and Whippingham Women’s Institutes and others in a parade to mark 100 years of some women in the UK being given the vote.

Waving banners and flags the parade started in the Jubilee Playing Fields and wound its way through East Cowes before ending in Kings Square where there were stalls, refreshments and entertainment throughout the afternoon.

WI members dressed in costumes depicting different decades since the law changed in 1918 with many choosing to wear Edwardian dress. They had decided to commemorate the events of 100 years ago after having a speaker, who works at the House of Commons, at one of their meetings. They also crafted wreaths, in suffragette colours of white, green and purple, which have been displayed in East Cowes businesses. Rainbows and Brownies also joined in with the wreath making each one choosing to depict a woman who had inspired them. 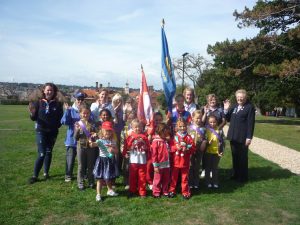 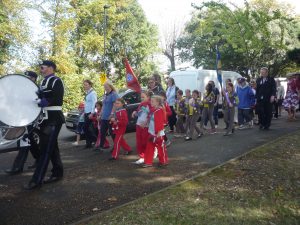 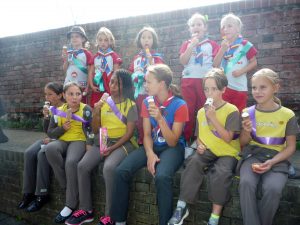 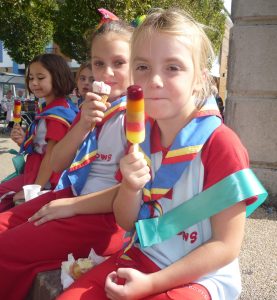 Women’s suffrage (the right of women to vote in elections) in the United Kingdom was a movement to fight for women’s right to vote. It became a national movement in the Victorian era. Women were not explicitly banned from voting in Great Britain until the 1832 Reform Act and the 1835 Municipal Corporations Act. In 1872 the fight for women’s suffrage became a national movement with the formation of the National Society for Women’s Suffrage and later the more influential National Union of Women’s Suffrage Societies (NUWSS). As well as in England, women’s suffrage movements in Wales and other parts of the United Kingdom gained momentum. The movements shifted sentiments in favour of woman suffrage by 1906. It was at this point that the militant campaign began with the formation of the Women’s Social and Political Union (WSPU). It finally succeeded through two laws in 1918 and 1928.