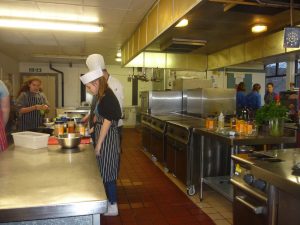 In conjunction with a public Open Evening at the Isle of Wight College members of Girlguiding IW undertook a Cooking Competition. This was a challenge for the girls to prepare. cook and serve a main course for four people in under two hours.

Members of the public, including prospective new college students, were able to view the teams of Guides and Rangers completing this challenge in the college kitchen adjacent to the restaurant.

Guest judge Chef Bradley Roe from Ventnor Botanic Gardens was joined by two members of IW College staff, Kirsty and Claire and all three judges found it a hard task to find a winning team.

However, after watching the girls’ cooking skills and tasting the food the Brighstone team were declared the winners.
At the presentation of the prizes, large ‘Practical Cookery’ books and cooking equipment for the winners and cooking equipment for the other teams Bradley Roe said that all the dishes were well cooked and presented and could easily be placed on the menus of London restaurants. “I would be willing to pay at least £20 for dishes such as these.” adding, “there were some delicious flavours and textures in what has been produced this evening.”

Carisbrooke Ranger Erica Hiscock said, “This competition has really been a fun thing to do, I have thoroughly  enjoyed it.”