Held at the Mattinson Centre, Corf Scout Camp, Janet welcomed everyone to the event saying that this would be her last Annual Review as Island Commissioner as she retires from the post, which she has held for nearly five years, at the end of May.

Janet said that the year had not been an easy one with girls waiting to join and leaders hard to find. A fundamental change to Girlguiding IW’s Constitution had taken place. All members on the Island had been given the chance to voice their opinions on the change which was to move from grouping the girls in Districts to grouping them in the four Sections of the organisation- Rainbows, Brownies, Guides and Senior Section.  Due to there being a membership of about 1,000 on the Island these Sections were subdivided into more local areas named after places on the Island. Following a year’s trial period the change had now taken place and it was hoped that Guiding on the Island could move forward encompassing the local changes as well as those of national change.

Two Brownies were presented with special awards- Certificates of Fortitude. Both girls Kohana Reid (9) of 10th Newport Brownies and Emily Mills (8) of Brighstone Brownies had saved lives by phoning 999 when relatives had collapsed.  Both had used 1st Aid knowledge and kept calm in difficult situations.

For ‘going that extra mile’ Angela Smith (Leader 4th Sandown Brownies and Appuldurcome Section Commissioner) was presented with a Good Service Award. Over the years Angela has held several Executive posts alongside her leadership of 4th Sandown Brownies. She has even organised Brownie activities during the School Summer Holidays when it is usual for a break in meetings.

Following the Awards presentations John Gulliver gave a very informative and illustrated talk on the RNLI which although featuring the RNLI nationally majored on RNLI activities on the Island especially Bembridge. Girlguiding members held a raffle in aid of the RNLI and a sale of RNLI mementos also took place.

At the end of the event Janet Lovell and her husband Martin were thanked for their support of Girlguiding IW over the past five years.

A quiet time was observed for two members who had recently died- Ann Harvey and Janet Colver. 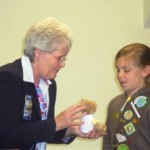 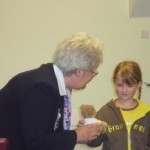 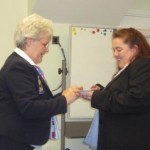 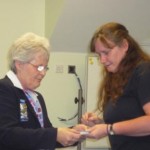 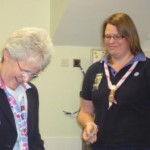 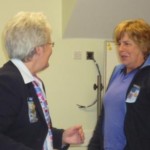 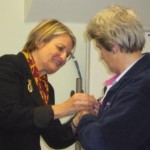 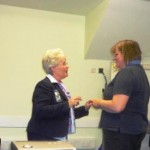 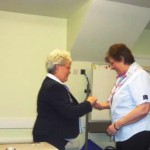