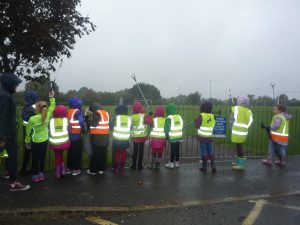 Rainbows, Brownies, Guides and Rangers across the Island have joined #PlasticPromise, the biggest ever girl-led campaign to tackle plastic pollution, launched by Girlguiding. New Girlguiding research reveals 88% of girls and young women aged 7-21 say it’s urgent we all do more to protect the environment.
An estimated 2.5 billion disposable coffee cups are thrown away in the UK every year. That’s almost 5,000 a minute, or 7 million per day. Around 15 million plastic bottles are littered, landfilled or incinerated every day.
Island unit members joined Rainbows, Brownies, Guides and Rangers and volunteers from across the UK during a week of action from 30 September to 6 October. They made a #PlasticPromise, committing to a simple but meaningful lifestyle change to help reduce single-use plastic.
Girls asked their friends, family, politicians and the public to join them and make a #PlasticPromise. Anyone can make a #PlasticPromise by visiting plasticpromises.co.uk. There are five promises to choose from:
1. Start using a reusable water bottle
2. Start using an alternative to disposable cutlery
3. Start using a reusable box or reusable wrapping instead of clingfilm
4. Start using a reusable coffee cup
5. Stand up and speak out about cutting plastic waste and make big brands listen
As well as making a #PlasticPromise, the Island units took part in a plastic-themed activity during their weekly Girlguiding meetings. They used their creativity to show why protecting the planet matters, taking plastic waste and turning it into sculptures of animals and other living objects they want to protect from plastic pollution. Wootton Rainbows and Brownies completed a Litter-Pick at Wootton Recreation Ground and other units as well as making plastic sculptures discussed protecting the planet.
Over the last few weeks girls from most of the Island units have looked at recycling schemes and completed litter picks in their local areas.

Angela Salt, Girlguiding CEO, said: “Plastic pollution is a defining issue of our time. It has mobilised girls and young women in Girlguiding because they’re worried about their future. If each of the nearly half a million girls and volunteers in Girlguiding makes a #PlasticPromise, we can make a big impact as a powerful force for change. Girlguiding is here to support girls to make a difference for their future.”