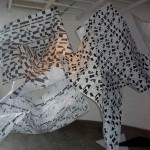 Generation ART: Young Artists on Tour is an exhibition of artwork of children and young people (aged 5 – 18). It has an associated learning programme supported by the Arts Council England’s Strategic Touring programme the Garfield Weston Foundation and the Helen Jean Cope Charity. It is on tour and  is on  display in The West Gallery, Quay Arts, Newport from 19th Mar to 7th May 2016.

Generation ART opened at Turner Contemporary, Margate in summer 2015, and was showing in New Walk Museum and Art Gallery and Soft Touch Arts, Leicester from 16th Jan to 6th March 2016 before heading to Quay Arts.

This exhibition includes a total of forty artworks by children and young people aged 5 to 18 years, four of whom are from the Isle of Wight; William John Morris, Oliver Bonner, Megan Smith and Max Snudden.

Quay Arts will also host a series of free family drop-ins and workshops across the Island inspired by Generation ART: Young Artists on Tour, encouraging local audiences, especially families, to get involved.

This commissioned artwork(pictured above) will open at the same time as the touring exhibition, after which, St George’s School, Newport will create a new ‘response’ exhibition in The Curve Gallery with Island artists Hannah George and Ian Whitmore, which will open on Saturday 23 April. Coinciding with this Red Tie Theatre will perform a new piece of workof live theatre in the West Gallery.