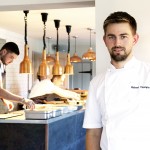 After eight years on the Island working for other people chef Robert Thompson is looking forward to being his own boss in his new venture.
Thompson’s based on the corner of Town Lane and South Street in Newport will offer relaxed, laid back dining. Robert promises the same good food he is known for, the same quality but in a more accessible setting.

As the only chef on the Island to have ever been awarded a Michelin Star his reputation precedes him.
Over the years, the site has seen a number of cafes and coffee shops come and go but was once the base for Tomlinson’s the florists. Indeed, the premises are about 140 years old.
It has been a race against time to restore and renovate the premises and Robert has played a leading role in the work himself.

Family and friends have chipped in with the work and he has employed craftsmen and builders he knows and trusts. Oak tables in the restaurant were made by his father Peter. Meanwhile, the wooden dining chairs have been sourced from Gatcombe and Niton churches as have the pews in the ground –floor restaurant.

This ground-floor features an open kitchen and caters for about ten diners or private parties. Following a clever re-design of the Town Lane end a bar is available for those wishing to have a pre-meal drink.
There is provision for forty covers upstairs. With two staircases in the premises, as originally the site was two properties, one will be used by diners and the other by staff serving the food.

Thompson’s will offer lunch and dinner Tuesday to Saturday. There will only be one sitting each time so patrons will not be rushed to vacate their table. Pre-booking is strongly advised, prior to the opening on the 4th August, a number of bookings had been taken for the weeks ahead. Reservations for the first night were very strong.

There is an a la carte menu plus an eight course tasting menu, with optional wine and cheese supplements as well as the traditional menus.
Robert said that he will be in residence in the kitchen for the vast majority of the time and only plans any closures in the off-season period.
After all the manual work he has undertaken during the renovation of the building over the past few months he is looking forward to donning his chef’s whites once more.