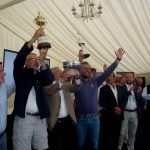 Following the long offshore race on Day 3 racing on Day 4 returned to short courses in the Solent but for Wednesday these short courses were in the west- off the Beaulieu river entrance and the weather mark off Hamstead on the Isle of Wight shore and an ‘around the cans’ race with a finish at Egypt Point.

A weather front passed through during early morning leaving behind it a rougher sea and there was a strong eastbound tide. These lively conditions created one casualty before the start gun fired with Moana (Flanders North Sea) suffering a severe sail rip during a pre-start gybe. Fortunately the team had its delivery mainsail back in Cowes and raced back to fit it, but in doing so scored maximum points for missing the race.  Conditions gradually abated though and the sea flattened in the afternoon making for another interesting day for the 220+ sailors taking part in this year’s Brewin Dolphin Commodores’ Cup.

By the end of racing and with the second race seeing a win for the France Blue big boat, Eric de Turkheim’s A13 Teasing Machine, there were enough points to see France Blue in first place on 110.5 points, 12.5 ahead of France White, with Flanders North Sea just another two points back.

Day 5 saw three more inshore races. However, racing returned to the central-eastern Solent with two windward-leeward races and one round the cans course. Thursday started in July-like sunshine with a light southwesterly wind, but the arrival of a front early afternoon brought cloud, light rain and a shifty breeze plus fog thick enough to make spotting marks difficult.

In the first race there was a pair of wins for GBR Red: The Henning family’s Mumm 36, Alice, won in Class 1 and the J/35, Bengal Magic, claimed the small boat race – the first bullets for both boats. These wins helped GBR Red to 186.5 points, just a few points away from the podium. At the end of  the day France Blue led with a similar (11.5) point margin to Day 4 and Flanders North Sea relieved France White of second place overall. Israel was in 5th position.

With a win for Eric de Turkheim’s A13, Teasing Machine, and a second for Daniel Andrieu’s Sun Fast 3200, Cifraline 4, France Blue advanced their lead in the overall results, holding a 35.5 lead margin over the second placed Flanders North Sea Team.

Sailing an anti-clockwise lap of the Island, the race started from the Royal Yacht Squadron line with a favourable ebb tide.  A southwesterly wind built making for a large exhilarating sea at the Shingles. From there it was a reach to St Catherine’s Point, a run down towards Bembridge, before the final run in back to Cowes.

Sadly, by the end of day 6 British hopes this year of gaining The Brewin Dolphin Commodores’ Cup were fading. RORC Admiral Andrew McIrvine’s First 40 La Réponse in GBR Red was going well until they lost a spinnaker approaching St Catherine’s.

Speaking generally of the race around the Isle of Wight, Andrew McIrvine observed “That was the second fastest I’ve ever done it.”

Races 11 and 12 were due to take place on Saturday starting at 10.30am. With little wind Race 11 was postponed to 12 noon. It eventually got underway some time later but all boats struggled. Sadly this single round the cans race was shortened as the wind began to die. A handful of Class 1 boats did finish before the wind died across the race course completely. Principal Race Officer Stuart Childerley explained: “We shortened the course because the wind was dying with two boats struggling to get around the weather mark. I was keen to try and get in a race that was reasonably fair but the wind just died away so quickly that in the context of the event we didn’t think it was fair.”  Childerley then announced, “race abandoned.”

Having fielded a trio of teams among the eight teams contesting the Cup France took three of the top four places in the final analysis. There was much spraying and drinking of Champagne as all the French contingent joined in the celebrations. 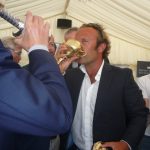 Previously France had won this regatta in 2006 and been on the podium on several occasions. Team Flanders North Sea comprising entries from Belgium, Netherlands and North France claimed the runners up slot.

Title sponsor Brewin Dolphin, which was established in 1762, took the role for a third consecutive regatta. This company not only sponsor this event but one of the show gardens at Chelsea Flower Show.