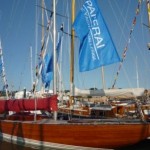 The Charles Stanley Cowes Classics Regatta runs from Monday 21st to Friday 25th July.  It is going to be a spectacular event with 150 or so yachts expected from Solent Sunbeams and XODs to stunning vintage classic cruisers and 8-metre boats. This regatta will be staged by the Royal London Yacht Club.

Nine teams will contest this year’s cup and having tasted victory in the 2010 contest, Ireland is in pursuit of the Brewin Dolphin Commodores’ Cup once again.

In this international offshore regatta for national teams, organised by The Royal Ocean Racing Club (RORC) and staged at Cowes during July the Irish team is set to make a comeback.

RYA Team Scotland was announced in February and following the conclusion of its selection trials over the bank holiday weekend (24-26 May), the RYA have announced that four teams have been selected to represent RYA Team GBR at the Brewin Dolphin Commodores’ Cup 2014, where Great Britain will aim to defend its 2012 title.

The French are coming to town! More accurately four teams of French boats have been entered in this year’s RORC Brewin Dolphin Commodores’ Cup. Having fielded just one team for the last event in 2012, France is back with a vengeance remembering how Géry Trentesaux’s French team stole victory from the powerful Irish in 2006. Since then France has never finished better than third, but this year they intend to put this right and to make the point, France is equalling the British line-up with their 12 boats.

This classic yacht regatta for the UK and held in Cowes is now in its 11th year and is the annual Regatta of the British Classic Yacht Club. It not only attracts entries from these shores but also regularly from Europe and occasionally from Canada. This regatta, which is part of the Panerai Classic Yachts Challenge, is perfect for classic boat enthusiasts to enjoy some fantastic racing and to get together with like-minded individuals with the same appreciation of owning a classic boat.

In 2014 the regatta will be taking place from the 12th to 19th July, with racing starting on Sunday 13th and the Classic Around the Island Race taking place on Monday 14th July. This race follows the original clockwise course of the first America’s Cup and racing is being organised by the Royal Yacht Squardon.

THE SEVENSTAR ROUND BRITAIN AND IRELAND RACE:

1802nm course – the ultimate test of endurance for sailors. This race has been supported by leading Dutch specialist yacht transport company Sevenstar since 2006 and the race takes competitors non-stop around the coastline of Britain and Ireland. On the way there are memorable landmarks which include the most northerly lighthouse – Muckle Flugga- off the Shetland Islands, Scotland before the boats return to Cowes.

Britain’s twice Olympic silver medallist Ian Walker will skipper Azzam (Determination) and he and the crew will take part in this race prior to their second successive Volvo Ocean Race 2014-2015 which starts  in October.