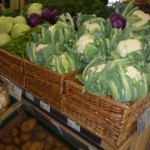 Having relocated to new purpose-built premises the Freshwater shop is now the Flagship store for the Southern Co-operative which has their head office in Portsmouth.

As part of the Co-op’s aim to support the community a defibrillator has been made available at the store’s entrance.

Instore a community hub provides a central information point, for community news and activities whilst outside there is a dedicated stopping point and pick up point for the local FYT bus.

In the car park a unique permeable surface absorbs rainfall to minimise puddles. Collected water is stored in a large tank for later discharge into the drainage system.

First undertaken in 2006-on the Island- the ‘Local Flavours’ scheme has been doubled in the new store with the range featuring Island grown and produced fruit and vegetables, bread, ice cream, wine, beer, mineral water and cheese.

Prior to the public opening members of community groups were invited to the new store where General Manager Tony McGuinness introduced the CEO of Southern Co-operative Mark Smith. 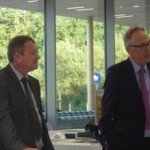