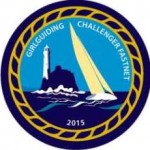 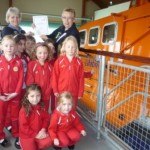 Younger members of Girlguiding on the Island are undertaking the challenges of the Fastnet Challenge with exciting activities for all ages whilst nine Guiders from across the UK who are taking part in the Rolex Fastnet Race have started their special trainings.
Janet Lovell, Guider of the 2nd Ryde Rainbows organised a visit to RNLI Bembridge for the Rainbows on 2nd May. After looking at the two Bembridge based life boats and a talk by RNLI Lifeboat Visit Officer Deborah Meadows the Rainbows presented a cheque for £219.10 which was money raised from a sponsored silence which the Rainbows completed for the SW Region’s 2015 Fastnet Challenge.

Deborah Meadows explained to the Rainbows how the Lifeboat Crews have pagers which call them up when they are needed to launch one of the lifeboats so that they can make a rescue at sea. She also told the Rainbows the cost of the Bembridge Lifeboats and the cost of the recently built Lifeboat Station. Funds are always needed for the RNLI and as well as handing over the cheque the rainbows purchased RNLI badges in the form of a yellow’MayDay’ boot.

Janet Lovell said “The Rainbows had decided to donate the money to the RNLI because the Lifeboat crews are brave to go to sea usually when the weather is bad”.

Frequent visitors to the Island over the next few months will be a team of Girlguiding members who, calling themselves the “Fastnet Divas” are taking part in this year’s Rolex Fastnet Race which leaves Cowes on 16th August. Prior to the Rolex Fastnet Race at least three training/qualifying races must be undertaken and all these start at Cowes and with other training sessions the crew will certainly know what the Island looks like.
Six of the crew members are from the SW England Region of Girlguiding and three are from other Regions who, as keen sailors, were eager to take up this extreme challenge of the training and race. It is the first time a Girlguiding team has entered the race and they will be one of a few all girl crews who have entered over the years.

One training session included pool work involving ‘man (or woman) overboard’ procedures. A second training has just taken place- boarding the boat- one of the four Challenger Yachts belonging to the Tall Ships Youth Trust which is based in Portsmouth.

After boarding the yacht at Portsmouth the Girlguiding crew, in association with others, sailed the boat around the Solent before a night at Cowes Yacht Haven.
A second day was spent training with the large spinnakers/ main sails on board and after all this very hard work a second night was spent on the yacht in Cowes.

Food played a large part in the build up to the first race (The Royal Ocean Racing Club Cervantes Trophy) which was at the beginning of May. A good diet is very necessary to keep fit and have enough strength for the physical work on board.
All the Girlguiding crew hope that others will get behind their super challenge either by following the crew on Facebook or Twitter or by looking at website posts.
https://www.facebook.com/pages/Fastnet-Divas/804727499564507
Twitter account @FastnetDivas 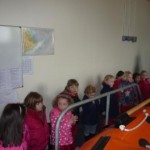 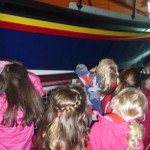 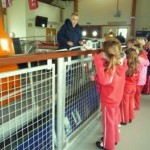