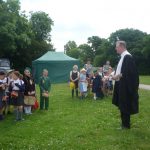 Children from Primary Schools across the Island enjoyed going back in time to 1939 recently. With activities organised by the IW Council Heritage Service based at Carisbrooke Castle Museum this annual event lets today’s children understand just how things were in 1939/1940 and how war time life was much different than now.

Based at Havenstreet Railway Station children were “evacuated” from their families and in readiness of perhaps several years of living away from parents were prepared for their new lives away from home.

In 1939 people expected cities to be bombed, as enemy planes tried to destroy factories. However bombs would hit homes and schools too, so children would be in danger. The government tried at the start of the war to ’empty the cities’ of children and mothers. This was ‘evacuation’, to protect them from air raids.

This plan was put into action in September 1939 and in just a few days about 800,000 children left their homes. However, many returned home after a few weeks. Others stayed in the countryside for the rest of the war. Hundreds of children arrived on the Island via a paddle steamer from Portsmouth to Ryde Pier. Following a time in a distribution centre (usually village halls) they were billeted with local families.

At Havenstreet, activities included playing with toys available in the war time years and before, having a lesson in a war-time class room, learning about rationing and shortage of food and tasting food such as fish paste, carrot spread and egg-less cake.  To enable the evacuation to take place a trip on the train from Havenstreet was also undertaken.

Staff from the Primary Schools taking part had prepared the children well for this experience and most children and adults were dressed in 1940’s fashions.

To help the children understand this period in history a Home Guard sergeant and a land army girl were on hand to explain to the children what life was going to be like in the village and just what to do with a gas mask on your way to the air-raid shelter. Lessons were undertaken in the class room and the food tasting sessions showed today’s children that despite rationing there was interesting food to be had which included a few treats.

Chairman of the IW Council Cllr Charles Chapman attended the event joining in the evacuation experience by undertaking the role of Mr. Charles a Council official overseeing the evacuation process.