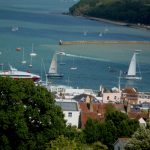 All the usual around the town entertainment is planned for this year’s AAM Cowes Week. There are the usual venues including The Parade, Northwood House, High Street, Cowes Yacht Haven and Shepard’s Wharf Marina now with its new events centre ‘Sugar Store’ and let’s not forget additional entertainment at East Cowes.

Sunday 7th August is Family Day with special activities for children this year based on ‘Swallows and Amazons.’ These will be held on The Parade at 2.30pm.

During the afternoon The Parade will host several solo singers including VIOW’s David Thornton (2pm Wednesday) and bands to keep everyone entertained. In the evenings the pace hots up somewhat with acts such as the Apple Beatles (Sunday 8.45pm) and Mumma Mia (Tuesday 9pm). 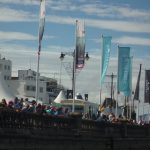 Stands and pop-up eateries will fill the Bandstand area and along The Parade. One of the regular stands will be the pop-up shoe shop from Chatham one of the Cowes Week sub-sponsors and  the Official Footwear Partner for Aberdeen Asset Management Cowes Week 2016. 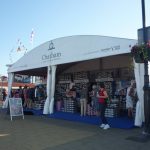 New for summer 2016, Chatham has launched its exclusive British collection for men: Made in Britain – which will be on display on Cowes Parade and showcases innovation and true British heritage. This new collection forms the first boating shoes to be made in Great Britain, from Chatham’s new purpose-built factory in Exeter, Devon.

In support of UKSA, Chatham will also continue its support of this local sailing youth charity with a donation made from the sale of all shoes bought from the innovative Aqua Go range.

In Cowes Yacht Haven there is Try Sailing with UKSA (book your place at UKSA stand) and Nyetimber Tasting Master Class (Sign up for your place at the Nyetimber Bus. £15pp- most days at 4pm.) 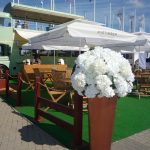 as well as a selection of bands and DJ sets on stage across the afternoon and evening.

Throughout the High Street there will be Music, entertainers, facepainting and Glitter Tattoos based at various locations whilst at Shepard’s Wharf Marina there is on stage entertainment including well known local band Lucid. (Monday 8.30pm.) Lucid also play on The Parade (Wednesday 7pm).

In the grounds of Northwood House everyone will once again have the chance to enjoy Cream Teas which will be served on the Eastern lawn and the Lawn Lounge will also ‘pop-up’. 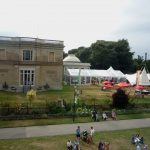 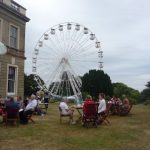 Open alongside the main Lawn Lounge Bar, the Gin Festival opens daily from 12noon.(5th Aug.) It is free to enter apart from after 5pm on Friday 12th Aug when tickets for the Firework Party are available. (£5) Two Gin and Jazz evenings on Sat. 6th & Wed. 10th Aug. will also feature.

Northwood House will host a Ladies Day Lunch on the Tuesday (Tickets on sale) followed in the evening by, the sponsored by Slingsby Gin, Ladies Day Trophy Presentation (invitation only). Sunday and Wednesday at Northwood House sees the popular Outdoor Cinema. (open 7pm -film at 8.30pm.)

Thursday sees as well as all the usual entertainment in the various venues what some will consider the highlight of the week other than the sailing: The Red Arrows.  Starting at 7.20pm and we know they are always on time. This display will be based around The Parade. (weather permitting). 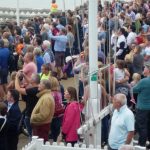 Of course Friday would not be the same without the Firework display. (9.30pm)There are a number of sponsors for this year’s event including the Yacht Clubs and the RYS, Red Funnel, Blue Funnel, Cowes Town Waterfront Trust, Solent & Wightline Cruises and Cowes Business Association. However to ensure that the display goes ahead this year and in the future Cowes Week Limited is always pleased to receive donations from members of the public. Red Funnel are organising a Firework Cruise departing Southampton and East Cowes.

Prior to the Fireworks and weather permitting there will be a RAF Typhoon Display. (7.30pm)

All the main activities (including the sailing) continue on Saturday and following that the Gin Festival  in the grounds of Northwood House will remain until Sunday 14th August. 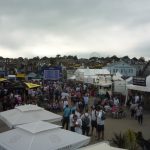