This is a crucial part of the electoral process. As parliament is dissolved, writs are hand delivered by Royal Mail managers to every constituency in the UK.

Once the count is complete following the election on May 7, in order to formalise the result the returning officer must write the name of the winning candidate on the Writ and return it to the Clerk to the Crown who is based in the Houses of Parliament.

The writ was hand delivered to County Hall in Newport and handed to the returning officer at 10:30am on Tuesday 31 March.

Residents who have not yet registered to vote can still do so up until the deadline of 20 April 2015. 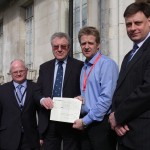