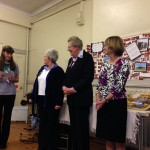 Celebrating achievements was the order of a special evening held at East Cowes Methodist Church Hall recently.
East Cowes Brownies had been collecting bedding on behalf of the RSPCA at Godshill and having filled a number of sacks invited two members of the RSPCA to visit their unit meeting to collect the bags.
All the Brownies were delighted to present the colourful sacks and thrilled to listen to a talk by their guests who had with them three creatures in need of a permanent home, a rabbit, a budgerigar and a snake!
Following the Brownies 1st East Cowes Guides held a Performance and Presentation evening where all the Guides gained their Performing Arts Badge and a Go For It- Showtime Badges whilst putting on an entertainment.
This entertainment included solos by three Guides, monologues written by the Guides and two skits, ‘Priderella (sic)and the Cince’ (sic) and the ‘Sound of Music’.
Guests included Girlguiding IW President Patricia Partridge, Island Commissioner Janet Lovell, Sallie Boulter B-P Adviser, parents, friends and ladies from the Methodist Church.
8 Guides received their Year Challenge badges and the highlight of the evening was the presentation of The Baden-Powell Award (the highest award for a Guide) to Caitlin Marsh-Brown (15).
Caitlin started her Guiding path as a member of the 37th Wakefield Brownies and Guides before moving to the Island. She joined East Cowes Guides in September2012 .
For her Award Caitlin achieved 5 interest Badges, World Guiding, Water Safety, First Aid, Cook and Independent Living. She also organised a Patrol Cooking Competition, ran a games evening for fellow Guides, took part in a WAGGGS initiative talking about a hobby and visiting the theatre.