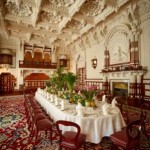 As Osborne House reopens its doors to the public for the Summer season there is the chance to see alterations to Queen Victoria’s Durbar Room. Conservation work to return this grand space to its original use as the banqueting hall for the Queen’s Isle of Wight home has taken place during the ‘house closed’ period.
Inspired by photographs from the1890s, English Heritage curators have replaced the display cases which dominated the middle of the room with a formal dining table and balloon backed dining chairs, to the specifications of the Victorian originals. With the table set for dinner it is adorned with a magnificent centrepiece consisting of lush greenery, pineapples and flowers. New interpretations will help visitors step into the grandeur of court life and understand Queen Victoria’s relationship with the Empire in her home’s Indian wing.
Constructed in 1890/91 to provide a state banqueting hall the name of the room Durbar is derived from the Indian word meaning state reception or a hall in which a state reception is held.
The room’s elaborate plaster ceiling, designed by Lockwood Kipling, father of Rudyard and one- time director of the Mayo School of Art in Lahore, is inspired by 16th Century North Indian architecture. It has recently been cleaned and conserved as has the stunning carpet, a reproduction of the original made in Agra in the 1890s.To complete the opulent picture, an intricately crafted peacock, originally taking 500 hours to produce and an Indian symbol of Ganesha, stands proud over the chimneypiece.
Visitors will also be able to admire a collection of decorative objects from the sub-continent, predominantly gifts, commemorating Queen Victoria’s golden and diamond jubilees of 1887 and 1897.
Osborne; the house, gardens, Swiss Cottage and beach is now open seven days a week until November 2015. For more information including admission prices visit www.english-heritage.org.uk/osborne