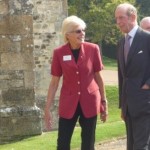 Carisbrooke Castle played host to HRH The Duke of Kent during his recent visit to the Island. He was accompanied by the Lord Lieutenant of the IW, Martin White, who introduced the Royal visitor to Judi Griffin, Chair of Carisbrooke Castle Museum Trustees and Girlguiding IW Ambassador.

There was much history for the Duke to view in the Museum, including the Newtown Mace. It is over 500 years old and was the symbol of authority in the ancient borough, which was founded in 1256 as Francheville.

He was particularly interested in the Isle of Wight at War displays in the upper gallery, which he was shown by Sarah Lang the Museum’s curator, before exploring the Royal Bedchamber. 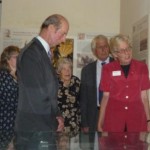 Outside the Duke was introduced to Michael Hunter, the curator for English Heritage on the Island. In the wellhouse he viewed the well which is 37 metres deep. One of the castle donkeys needs to turn the treadwheel for 17 revolutions to raise one bucket. Next on the agenda was the restored Princess Beatrice Royal Gardens.

On leaving the Castle the Royal Party moved on to the IW Society for the Blind’s headquarters at Millbrooke House, Carisbrooke Road where Estelle Thomas CEO and Society Chairman Stuart Kitching welcomed the VIP.

Tim Morris, an apprentice with the Society, demonstrated the workings of the charity’s Braille Printer. Tim explained that the Society also produces a weekly newspaper in audio format for some 200 clients.

After touring the building the Duke of Kent presented the Queen’s Award for Voluntary Service to Ruth Hollingshead, who is a volunteer, trustee as well as being a service user. 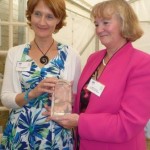 Stuart Kitching invited the Duke to cut a celebration cake.

Last year there were some 400 charities nationally nominated for the Award, with 100 being successful after scrutiny. The IW Society for The Blind was the only recipient on the Island.

There are some 90 volunteers in the society and overall they put in 200 hours of service each week to the blind and partially sighted residents of the Isle of Wight. Currently there are eight trustees, with one vacancy and they each serve a three year term voting each year for the Chairperson.

Photo shows Ruth (L) and Estelle with the Award.