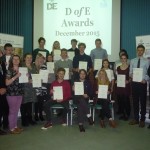 Westridge Community Learning Centre was the venue for the annual Duke of Edinburgh’s Award’s Presentation Evening. Carol Taverner, D of E Facilitator on the Island welcomed award achievers, families, friends and guests and Lee Matthews IW Council D of E Manager gave an introduction to the evening.
Carol pointed out that although many embark on the D of E Programme not all last the course. Those who do need to display determination, tenacity and stamina. Their expeditions require participants to work as a team but other sections of the Awards show individual abilities.
This year three new centres had joined in-West Wight Sports & Community Centre, Shanklin Youth & Voluntary Centre and The Way Forward.
There were no Gold awards achieved this year but Carol pointed out a number of participants are nearing their goal and Gold Award holders are subsequently invited to St. James’ Palace to receive their Awards. Gold Award holder and Young Ambassador Emma Snow spoke on the Diamond Challenge 2016 which will celebrate 60 years of D of E, the scheme having been launched by The Duke of Edinburgh in 1956.
During the evening there were three Silver Awards and twenty at Bronze level presented to young people, of whom all but four attended. Presentations were made by two IW Councillors -Council Leader Jonathon Bacon and Council Chairman Charles Chapman.
Bronze Award achievers attending the presentation were: Etienne Tracy, Madeleine Higgs, Ruth Jackson, Eleanor Kenney, Megan McArthur, Michael Maiger, Owen Prigmore and Mhari Webb all from the Newport Open Award Centre. Elliot Whatson (West Wight Sports Centre), Lucy Dreyer, Tom Dreyer and Justine Watson (The Way Forward),Emma Hamilton-Toogood (St. George’s School) Luke Blackman & Charlotte Turner ( Christ the King College), Oliver Niemiec (Sandown Bay Academy).
Ellie King (Sandown Bay Academy), Tristan Hodges (Challenge & Adventure), Daisy Cody& Naomi Skelton (West Wight Sports Centre) are also Bronze Award recipients and will receive their awards at another time.
The three Silver achievers were: Caleb Gilliam-Scott (Island Innovations 6th Form) and Lydia Cole and Ben Wilkinson (Sandown Bay Academy).
All participants undertook a selection of the dozens of activities open to those participating in D of E. Many of the young people explained their individual experiences.
Charlotte Turner explained that prior to her assessed expedition there had been a change of team members so she had to work with people new to her. For her community section she had undertaken helping with Niton Brownies and is now working on a Girlguiding leadership qualification. 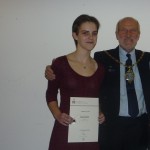 Justine Watson said that she had helped at the Isobel Cafe where she enjoyed making scones. 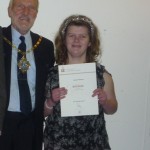 Both Charlotte and Justine are members of Girlguiding IW. Justine is a Ranger and Charlotte is working for her leadership qualification. Although they decided not  to undertake their D of E Awards via Girlguiding the opportunity is always available see elsewhere on this website for more information.

Luke Blackman had undertaken Rugby and Oliver Niemiec Cricket whilst, for his Silver Award, Caleb Gilliam-Scott had helped teach Maths to Year 7 students as well as learning gardening skills in an allotment.
In addition to the young people receiving awards, two volunteer helpers were handed Long Service Awards. June Burton was rewarded for 20 years service while Stephanie Burton was honoured for completing 12 years.