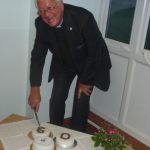 2016 sees the 60 years of the Duke of Edinburgh’s Award (D of E).Created by the Duke, with support from Sir John Hunt, the Award commenced in 1956.

Originally for boys and young men it was opened up to girls and young women soon after.

Participants on the Island were keen to join in the Awards and the first male to achieve a Gold award was Scout Mike Exell from Ryde in 1963.

Back in the 1950s and 1960s participants for the three awards, Bronze, Silver and Gold were aged between 14 and 21 but the age range has now been extended to 14-25 to mainly take into consideration further education for young people.

First female to achieve a Gold Award was Suzanne Whitewood (neeLambert) in 1966 who at that time was a member of Girlguiding at Ventnor.

Today the Island can boast over 200 young people who have achieved a Gold Award with hundreds of others achieving Bronze and Silver. Across the Island at present there are hundreds working for Awards in schools, colleges, Open Award Centres and within other local organisations.

To celebrate this ‘Diamond’ year a number of special events are being held across the UK and on the Island several events are planned for the year.

Recently a celebration party was held for Gold Award holders and past and present group leaders and assessors. Everyone enjoyed a buffet with food supplied by those attending plus donations from Morrison’s, Newport, Co-operative, Newport and M & S Newport whilst Waitrose, East Cowes donated celebrations cakes.

Mike and Suzanne were amongst those attending as were Carol Taverner a Gold Award Achiever as well as the present IW Council D of E facilitator, Cllr. Charles Chapman (Chairman IW Council)and Mary Brinton, long time secretary to the IW Council Youth Officer who was responsible for overseeing the running of the Award on the Island.

Some of the other Gold Award attendees at the party included Tina Parsonage (nee Kullendar) who achieved her Gold Award in 1985 whilst a member of Girlguiding at Shanklin and two members of the Girls Brigade, Tracey Holdsworth and Sandra Brailsford.

A display of memorabilia was arranged by Carol Taverner and Anne Robinson, who helped to arrange the party with Suzanne Whitewood, planned a D of E quiz.

Suzanne said, “It was great for everyone to get together. Some had not seen each other for some time whilst others were meeting new Gold award achievers who they had not met before and discussions on past activities caused some amusement. I would like to thank the local stores for their donations of food  which made for a super buffet.”

Other ‘Diamond’ events on the Island include a camp for young people, a cycling challenge, a spider walk and a Murder Mystery evening.