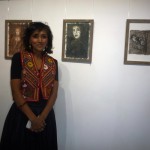 ‘Retracing the Eye’ is a new exhibition at Dimbola, Freshwater featuring 26 etchings, carborundums and woodcuts by Sunara Begum. A British artist of Bangladeshi descent, she was originally involved in film photography before becoming an artist and printmaker.
Dr Brian Hinton MBE a Dimbola Gallery trustee was first aware of Sunara’s work at an exhibition at the Crypt Gallery, St. Martin’s in the Fields, London a year ago.
Her solo exhibition, arranged by Dr. Rachel Flynn, is a new interpretation of Julia Margaret Cameron’s work with colours and textures in her work having reminiscences of terracotta and earth pigment. This work also draws on her indigenous culture.
Dunstan Perera, a Sri Lankan photographer and film maker has been Sunara’s mentor for the last two and a half years, following a chance meeting. On the last day of a ten day exhibition the pair met for the first time and Dunstan offered to be her adviser.
It was Dunstan who introduced Sunara to the work of Julia Margaret Cameron. On her first trip to Sri Lanka (previously Ceylon) Sunara visited the former home of Julia and said that she immediately felt at home there and a bonding to Julia and her work.
Work in the exhibition, which runs until 3rd January 2016, was previously on show in Sri Lanka where it was well received.

Official photographer for the opening event at Dimbola was Joshua Millais, who is the great, great grandson of the painter and illustrator Sir John Millais who was a frequent visitor to Farringford and was one of the Freshwater Circle which included Julia and Lord Tennyson. Joshua was interested to see the photograph of his relative on display at Dimbola. 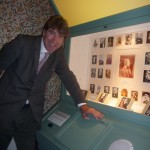 Also at Dimbola, until 3rd January 2016 is ‘Found’ an exhibition of black and white photographs selected from hundreds gathered from the flea markets of Berlin. They were chosen when Island singer-songwriter Paul Armfield’s friend Elinor used her artist’s eye to sift through the vast collection.
This exhibition is mounted in conjunction with Paul’s sixth album, due to be released in November. ‘Found’ is a suite of songs inspired by the collection of photographs. The album was recorded in Paul’s front room and is released as a CD with 16 postcards featuring some of the photographs in the exhibition. There will be a limited edition of 1,000 signed and numbered copies. 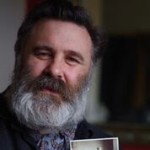