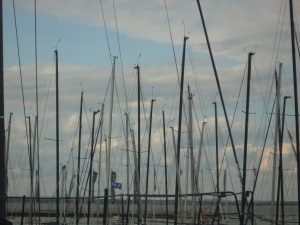 As already reported some members of Girlguiding IW joined in the activities for Cowes Week 2019. Here is a general round up of the regatta and other events held in Cowes during this special week in August.

Following the bad weather on Saturday (10th August), sailing finally got underway on Sunday as did several activities for Family Day and the stands and bars in the Cowes Week Village on Cowes Parade saw plenty of customers. Family oriented activities from the 1851 Trust stand on Cowes Parade included a sailing inspired treasure hunt around Cowes and a grinding challenge. 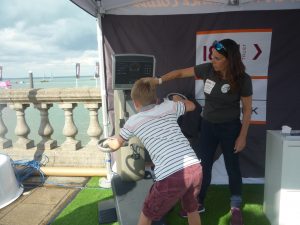 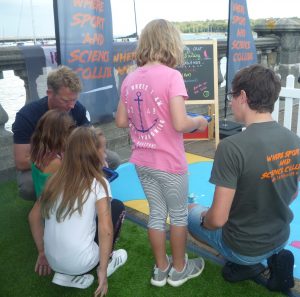 In Northwood Park, the IW Gin Festival featured 93 different gins from 17 countries around the World. Hosted by the Island’s very own brand Mermaid, which is produced by the IW Distillery, this festival was certainly the place to be for lovers of all things Gin. For those liking a strong version of Gin the strongest on offer was, at 57% Proof, the Slingsby Navy Strength featuring 24 botanicals. Various other activities took place in and around Northwood House and despite the weather were enjoyed. 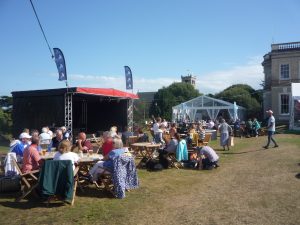 At Northwood House on Monday Cllr. Lora Peacey-Wilcox (Mayor) hosted the Cowes Town Council Cowes Week Reception. Prior to that event, she attended the official re-opening of the ‘Rotunda’ which forms an ornate entrance to Northwood House featuring eight columns. Twenty-two years ago, proud local Lora spoke out against the sell- off of Northwood House by the IW Council. This property is now run by Trustees.
Matching the new décor of the refurbished Rotunda blue and gold carpeting came courtesy of Cunard Cruises when a Cunard employee was married in Northwood House. An offer of new carpets from Cunard was an offer the Trustees of Northwood House could not refuse. 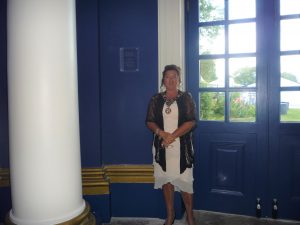 Open for Cowes Week an empty shop in Cowes High Street is in use by the Wight Aid Charity to raise public awareness of this local charity which supports other local charities by donating funds for projects. Recently launched The Wight Book was on sale as was the glass artwork by Brian Marriot, a trustee of Wight Aid. 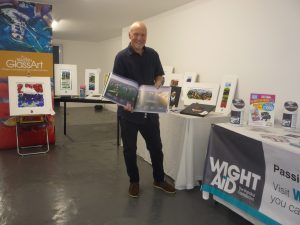 Designated as the regatta within the regatta the Sunsail fleet saw their Match F40 yachts competing against each other every day. Corporate crews changed daily but the identical boats battled it out for two trophies- The Sunsail Overall Trophy and the Finance Challenge Trophy. Sponsors of these events included Investec and Opihr Gin and daily prizegivings included gifts from these companies as well as a daily trophy.
Companies with a crew in these regattas included Tenzing, Slingsby, Investec, Deloitte and Red Funnel. On Ladies Day the Slingsby boat saw a celeb or two on board their boat whilst the Red Funnel boat had Xavier Baker distiller of Mermaid Gin on board. Xavier said that he had enjoyed the experience particularly working on the bow and raising the spinnaker. By the end of the week Tenzing was certainly the top team- not only winning Friday’s race but the Finance Challenge and Overall trophies as well. 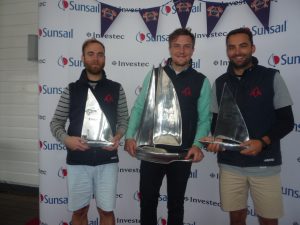 Simon Boulding from Sunsail praised the Race Committees saying that the race- courses had been chosen with care and with difficult weather situations safety had been taken into consideration.

Wednesday’s Youth Day, supported by Antigua Sailing Week, saw a focus on young sailors at Cowes Week in recognition of the 20 crews in which all members were aged under 25, plus a further 28 young skippers.
Alex Downer’s Panther won Wednesday’s race in the Squib class and by the end of the week secured the Musto Young Skippers Trophy. Oliver Hill’s SB20 H2 Sailing Team was second in the Young Skippers competition with Joe Bottomley’s First 40 Sailplane Bucketlust third.
Also, on Wednesday Oliver Hill’s SB20 H2 Sailing Team was leading the competition for the Antigua Sailing Week Under 25 Trophy and in fact went on to win it, with Hugo Vallerie’s Diam 24 catamaran Sofia 3 second.

Bad weather on Friday saw the cancellation of the RAF Typhoon display but the Fireworks sponsored this year by Red Funnel to commemorate 50 years of their high-speed service went ahead.