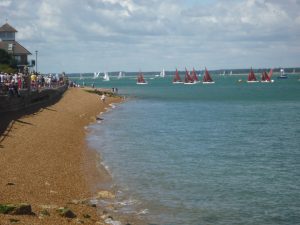 We are always happy when we hear of something special for the youth of this World as they form the future.

Cowes Week Limited is delighted to announce that they have partnered with another famous sailing regatta, Antigua Sailing Week, to further support young sailors at the event.
CWL have previously announced their youth initiative which offers discounted entry fees to boats with crews of under 25 year olds. The Under 25 Youth initiative, which has been running since 2012, has succeeded in doing what it was originally designed for – inspiring and making it possible for young people to race at Cowes Week. Cowes Week Ltd is once again offering the first 25 crews to enter, who are all under age 25 at the time of the regatta, a 50% discount on the entry fee.
Now CWL has partnered with Antigua Sailing Week, who are supporting the youth agenda by taking naming rights to Youth Day, which takes place on Wednesday 14th August. This is an opportunity to really put the spotlight on young sailors, offering encouragement and highlighting their successes. The day will culminate in a Caribbean party for all registered competitors aged under 25. This will be a great way for younger sailors to network and share stories about their on-the-water experiences.
The Under 25 Trophy will be presented by Antigua Sailing Week at the Friday Prize Giving with an amazing prize up for grabs for the Skipper of the winning crew – a chance for the Skipper and a guest to race in Antigua Sailing Week 2020, with flights and accommodation provided, as part of the ASW Youth to Keel Programme. The Tourist Board of Antigua & Barbuda will also have a stand on Cowes Parade where visitors can learn more about the islands and all they have to offer. By partnering with Antigua Sailing Week and offering an extremely attractive package to young sailors under the age of 25, CWL hopes to continue to increase the numbers of young sailors competing at Cowes Week by providing exciting racing and a lively après-sail scene shoreside.

Now an up-date on the environment:

Following the success of last year’s ‘anti-plastic’ campaign CWL is signed up to the Sailors for the Sea ‘Clean Regattas Programme’, a voluntary, self-assessment tool that provides a system to benchmark what the environmental footprint is today and set goals for the future. Cowes Week has achieved a Silver Certification.
This year, CWL has taken the decision not to give competitors bow stickers or decals for their boats in what is sure to be a popular move with the increasing concern about plastic entering the sea. It is, however, recognised that bow stickers are a useful branding tool for the event and for sponsors, especially in images and CWL has come up with an innovative solution: using virtual bowstickers, which will be applied to a range of images, post-production for use by the press and in event communications and marketing.
CWL will also not be issuing competitor wristbands, which in the past have not been recyclable. Instead all competitors will be able to use a code in the event App in order to access a range of competitor-specific benefits including offers and discounts across the regatta.
CWL would like to encourage all competitors to avoid single-use plastic and to instead use refillable water bottles. CWL will be once again working with aql, Cowes Week’s Official Communications sponsor, who will be installing water sensors on the Sunsail-funded water fountains situated at Cowes Yacht Haven and Shepards Marina to monitor usage throughout the week. On the water, all the regatta support boats will be supplied with large water canisters to allow crew to refill throughout the day. Cowes Week Ltd is once again encouraging local shops and cafés to offer free water refills to anyone with a re-usable drinks bottle. Businesses interested in joining the scheme will be given a sticker indicating their participation to the public.