Formed in 2003, Cowes Heritage has mounted its 14th Exhibition at Regatta House, Bath Road, Cowes. Entitled ‘Celebrations’ it is sponsored by Cowes Town Waterfront Trust and is open each day from 10am-4pm until Sunday 8th November.

Fitting the theme of Celebrations it is appropriate that water-based activity features strongly. In 2001 Cowes was the backdrop for the America’s Cup Jubilee. There is a personal letter from Prince Philip to Maldwin Drummond OBE the main organiser of the event and past Commodore of the RYS.
For the America’s Cup Jubilee Peter Harrison’s yacht GBR Challenge won a dramatic re-enactment race. There was a Maori escort for the actual America’s Cup Trophy, then held by the kiwis, for the Cup’s arrival in Cowes. A poster for the original race in 1851 proves that the race was for the £100 cup- not 100 Guineas as widely believed.

More recently the RYS Bicentenary is chronicled. Kings William IV and Edward VII were both Admirals of the RYS as is Prince Philip. King William IV could be considered the first Admiral of the RYS as he conferred the name on the Club in 1833 and he constituted himself its head. On the death of Queen Victoria, since the Prince of Wales could not continue to be Commodore once he became King Edward VII, the title of Admiral was reintroduced. This practice of the monarch being Admiral as well as Patron continued with subsequent monarchs until the succession of the present Queen when she became Patron and HRH Prince Philip became Admiral.
There is a scene in the exhibition depicting RYS members greeting the German Kaiser at Cowes Castle in 1895 and the castle was also captured on canvas by J.W.M. Turner in 1797. The Earl of Uxbridge (Henry Paget) later the Marquess of Anglesea, who was second in command at the Battle of Waterloo, was one of the last occupants of Cowes Castle when he held the title of Captain of Cowes Castle.

Ellen MacArthur can be seen being greeted back in Cowes following her 71 days 14hours 18 minutes and 33 seconds on board the trimaran B&Q having sailed around the World.
Voted Yachtsman of the Year for 1998 she was subsequently made a Dame having already been awarded an MBE.

There have been a number of Royal Visits to the Island over the years. One view exhibited shows Queen Victoria’s Diamond Jubilee Procession.
In July 1965 HM the Queen, accompanied by the Duke of Edinburgh visited Carisbrooke Castle. There she installed Lord Louis Mountbatten as Governor of the Isle of Wight, a post he held until his assassination.
Other royals visiting the Island over the years include King George V and Queen Mary in 1935 and more recently Prince Charles, Princess Anne, the Queen Mother and the Earl and Countess of Wessex.

Of course there is much local interest too shown in the exhibition with celebrations of winnings of sports trophies, special anniversaries at local schools and awards to local people.

With this year’s Centenary Celebrations of the WI it was appropriate that the exhibition was opened by Sue Bliss,(pictured) Vice Chairman of the WI’s IW Federation. She was introduced by long time Cowes Heritage member Maureen Groves who said that the members of Cowes Heritage work on their projects for a year before each annual exhibition is staged.
Having undertaken her own research on the WI, decade by decade, Sue Bliss said that she realised how much effort is required to mount such an exhibition and praised the members of Cowes Heritage.
Within this year’s topics the WI is featured. There is a photograph of Island members en route to Buckingham Palace for the Centenary Garden Party, where 8,000 members gathered. Mini sandwiches, fruit tartlets, Battenberg cake and coffee Eclairs were the delights to be sampled.
Cowes WI, Gurnard Bay Evening WI, Northwood Afternoon WI and Medham Evening WI comprise the Solent Group and with its 100 years of history the WI certainly had something to celebrate. 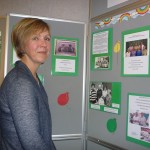 Amongst other exhibits is a restored 1864 edition of an Ordnance Survey Map of Cowes…..in fact there is so much to see one viewing is not enough.