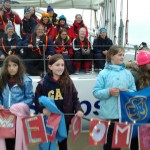 After the visit to Challenger3 by Shirley Robertson OBE, the ‘Fastnet Divas’ Patron ,and the send off by well wishers at Cowes, which included members of Girlguiding IW, Challenger 3, along with most of the 350+ fleet decided to begin the race close to the mainland shore so as to get the most benefit from what little breeze there was. All starts on Sunday 16th and from the RYS Line, were a sight to see with the yachts jostling for position in this the 90th anniversary of the Fastnet Race, now sponsored by Rolex.

As expected most starts were very slow. The multihull line-up included the world’s fastest offshore race boat, Dona Bertarelli and Yann Guichard’s 40m trimaran Spindrift 2, and the impressive Multi 80 Prince de Bretagne, but with zero wind it was like Formula 1 cars with no fuel. American Lloyd Thornburg’s MOD70 Phaedo made the best of it, but even with the tide turning and the wind eventually filling in, it still took the boat 2.5 hours to cover the 10 miles to the Needles travelling at just four knots.

Unfortunately US yacht ‘Lucky’ which was the first to cross the line in the recent TR15 (Trans-Atlantic Race from Newport Rhode Island, USA to the Lizard followed by a coastal race from the Lizard to Cowes) did not on this occasion live up to its name –going aground near the start and having to be assisted by Isle of Wight RNLI boats.
During the first few hours of the Rolex Fastnet Race most yachts managed to pick up 3-4 knots of wind and on a check with the tracking system Challenger 3, which is a 72’ yacht belonging to the Tall Ships Youth Trust, had reached Weymouth by 23.00 on Sunday evening. An official RORC, (organisers of the race) report as well as the tracking system showed most of the fleet between Portland and Lands End except for the big boats which had reached the Celtic Sea. Shirley Robertson who had been filming on ‘Comanche’ the day before the race had told the ‘Fastnet Divas’ that due to the lack of wind which was forecast a number of crew had left this boat to compensate for the lack of wind and to enable the boat to pick up speed when the wind started to blow.
By Monday, according to the Tracker, Challenger 3 was making good progress and heading for the Celtic Sea and the rounding of the Rock whilst Spindrift 2 rounded the Fastnet Rock at 16:49:51 BST on that day- the17th of August.
Tuesday saw the crew of Challenger 3 pressing on and Wednesday saw the moment all the crew of Challenger 3 had been waiting for –the rounding of the Fastnet Rock off Southern Ireland. Before the start of the race the Fastnet Divas had requested from each other that whoever was on watch when the rock was rounded should call the others out of their bunks to view this unique sight possibly only seen by sailors in this race. They rounded the Fastnet Rock at 22.33 on the 19th August after sailing for 3days 9hours and 13minutes.

Meanwhile Jim Clark’s 100-ft Maxi Comanche from the United States claimed monohull line honours finishing a mere 4 minutes ahead of compatriot George David’s 88-ft Rambler and with Swiss yacht Spindrift 2 claiming the multihull line honours crown.
By Thursday the wind had increased to 9-10 knots and on the Tracker Challenger 3 was making the most of this and heading back to the Isles of Scilly and Lands End across the Celtic Sea.
This was followed by the long haul from Penzance to the finish of the race at Plymouth which Challenger3 completed through Thursday and on into Friday, crossing the line at 5.47on Friday morning. All the Girlguiding crew and the others on board were thrilled to be greeted by Guides from 1st and 2nd Crownhill Guides who had got up at 4.30 to witness the ‘Fastnet Divas’ finish the 600+miles race.

Soon after the race, showers and some rest were the order of the day for the sailors followed by a party for all those taking part organised by the Royal Ocean Racing Club (RORC). Here the traditional prizegiving took place. Géry Trentesaux and his JPK 10.80 Courrier Du Leon had been confirmed by the Royal Ocean Racing Club as winner of the 2015 Rolex Fastnet Race. For this the team received the Fastnet Challenge Trophy at this event which doubled as the 90th anniversary celebrations of the RORC’s flagship offshore race as well as this year’s prizegiving.
It was the Frenchman’s 13th attempt at the Rolex Fastnet Race since his first in 1977, Trentesaux’s performance was exceptional as at the windless start the boat had been ‘over early’ and took 40 minutes to restart.

All the Fastnet Divas will have their own stories and memories of this great achievement, the first time a Girlguiding Crew has taken part in this race which is considered one of the toughest in the World.
Here are some of their comments: Hannah Nobbs from Sturminster Newton Guides, Dorset said “We had a wonderful welcome this morning at the quayside in Plymouth from Guides“ whilst Hilary Zayed Beaconsfield Guides and District Commissioner Beaconsfield District, Bucks added “ The Guides reception was unexpected and delightful. Fortunately we still had enough cake to share! The party was a lot of fun” and Amy Mossop, Basingstoke (St Michaels) Guides, Hampshire, said,” The whole experience was amazing and makes me proud to be a part of something so special. We may not have been fast, but we sailed in the spirit of Guiding and had fun throughout and partied hard at the RORC party which was amazing! Fantastic to be among so many ‘real’ and serious sailors. We had lots of lovely comments from other crews.”
Other ‘Fastnet Divas’ are: Charlotte Scoynes, 11th Chippenham Guides and 1st Calne Guides Wiltshire, Jos Baldock, Gainsborough Rainbows & Brownies & County Senior Section Co-ordinator, Lincs, Kate Felton, Sturminster Newton Guides, Dorset, Jane Brooke, Curry Rivel and Drayton Guides, Somerset, Tanya Trevena, 1st Sidmouth Guides, Devon, and April Ulyatt, Mansfield Rainbows/ Mansfield Guides/ Mansfield Powell Rangers, Nottinghamshire.

Well done to all and Congratulations.