This year’s IW Festival began on Thursday when entertainment was provided in the BT Sport Big Top for campers who had arrived early.

A tribute band ‘The Doors Alive’ commenced proceedings. Boy George engaged with the audience and his set was well received.

Formed in 1995 Biffy Clyro, Kilmarnock’s finest, topped the bill on Friday. Scotland’s answer to the Foo Fighters in more ways than one, lead vocalist/guitarist- Simon Neil was supported by theJohnston twins- bassist James and drummer Ben. They previously played here in 2012.

Earlier, Starsailor made a triumphant return to Seaclose with their latest line-up assembled by James Walsh.

Saturday evening saw Isle of Wight singer/song writer Jazzy Heath give a polished performance of her own work in the Whisky Sessions area.  Although set up to show what a variety of Whisky there is now across the world the organisers offer a chance to up and coming performers to perform on their stage. During Jazzy’s session , where she played a keyboard as well as singing, the area was busy both inside and outside the covered area and each song was well received by the audience.

Formed 31 years ago the Red Hot Chili Peppers were the Saturday headliners. Opening with ‘Can’t Stop’ the quartet produced an energetic and demented display during their 80 minutes on stage. It was not a polished performance but they did leave the audience wanting more. Within minutes of leaving the stage a police escort took them to their transport ready for their next venue.

At Sunday lunchtime Wight Noize Winners the Naked Fridays opened the main stage for the second time in their short career. Having previously won in 2012 they felt very lucky to have a second chance to impress. Reuben Mowle is the lead singer and synth player and Tom Silk is their drummer. Bassist Chris Hannon is joined by guitarist Michael Furniss. As it was Father’s Day the band paid tribute to their fathers and other Island residents who had helped them gain their success.

Festival organiser John Giddings had promised a surprise for the weekend. He delivered a masterstroke at 5pm Sunday when the roar of the Red Arrows announced their arrival. They proceeded to give a mesmerising display of some 20 minutes plus.

Red, White and Blue smoke trails billowed over the whole of Newport as their performance stopped people in their tracks. One formation they used was their signature Concorde shape.

Tennessee rockers The Kings of Leon first graced the Seaclose stage in2011 with a below par performance. Come Sunday night they were back to close this year’s festival, opening with ‘Revelry’.

During their 90 minutes set they unveiled some revamped numbers. Unfortunately ‘Molly’s Chambers’ was rendered almost unrecognisable.

Finally they brought the festival to an end by playing their two million-selling singles including ‘Use Somebody’ and as the final notes died away the firework display lit up an, only just, dark sky. 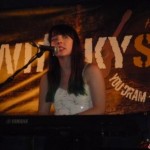 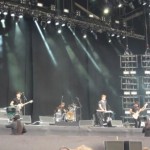