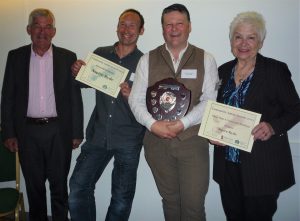 Based at Riverside, Newport, Community Action IW have hosted their annual awards.
Chief Executive Mike Bulpitt, who acted as Master of Ceremonies for the event, introduced their new President Mary Case and thanked the sponsors.

Mary said that she was impressed with so much voluntary work being undertaken across the Island. Communities would be in a poor state without the dedication of those who volunteer to help others. More volunteers are always needed and there are so many voluntary groups to choose from. She thanked Mike Bulpitt and Amanda Coyle and the staff at Riverside for all they do.

Judging for the Community Action Awards was undertaken, over three days, by Mike Bulpitt, Mary Case and the past Chair of IW Council Cllr. Lora Peacey- Wilcox. Contenders were considered in seven different categories.

Sadly there was no entry from Girlguiding this year but across the Island voluntary groups showed just how the Island  and Island residents are fortunate to have great support from volunteers.

Formed in 1995 Ryde Saints Football Club won the SPORT section, for supporting teenagers and youth players many of whom having come from difficult backgrounds. Thanks to the club one player had been drug free for 10 years.
Led by a group of hard-working young people Ventnor Exchange took the honours in the ARTS AND HERITAGE discipline. With two full time staff plus an apprentice, Ventnor Exchange is behind the now well- established Ventnor Fringe which started in 2016 as well as bringing creative skills to the community.
With a huge army of volunteers Aspire Ryde won through in the VILLAGE HALL AND COMMUNITY BUILDINGS grouping. Aspire forms the hub for 50 other groups as well as hosting activities.
A not for profit group Common Space won the ENVIRONMENT category. They are responsible for a number of projects in the Sandown Bay Area and are based on the Browns Golf site. Their projects cover wildlife and history and they have supported a Forest School.
Supporting almost 200 people and founded 25 years ago Cruse Bereavement got the vote in the OLDER PEOPLE division. They work with local funeral directors and others to help following bereavements.
Boasting some 500 members and having started in the 1960s Shanklin Voluntary Youth Club edged the CHILDREN & YOUNG PEOPLE award. This club offers Discos, games, football and a host of other activities for young people. They also work with the local Youth Football clubs.
Freshwater Independent Lifeboat was the worthy winner in the LOCAL COMMUNITIES section. A dedicated and passionate group of some 60 volunteers manage the lifeboats with many contributing to vital fundraising.
Several special awards rounded off the event. Shanklin Voluntary Youth & Community Centre was presented with The Shahida Nehorai Award which commemorates her work with Community Action.
Jack Whitewood, the creative driving force behind Ventnor Exchange was the recipient of the Judges Special Award with Mike Bulpitt saying that Jack is so enthusiastic and has flair and inspiration.
Overall the judges chose Aspire, Ryde for their work across the community. They took the shield and a cheque for £1,500. It is hoped that this prize money will help towards a soft play area. A £500 cheque was presented to the overall runner up- Cruse Bereavement.
There were three financial prizes presented in each category by the sponsors: Community Action IW, Morris Crocker, Norris & Fisher, AONB. Island Healthcare Ltd., IWCF and Glanvilles Damant.