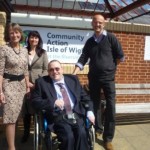 A major step forward in the Community Volunteering and Charity sector has occurred with the merger of two high profile Island organisations.
To celebrate this major collaboration a launch event was staged at Riverside Centre, Newport. It is that organisation that has linked up with Community action IW (CAIW), formally known as the IW Rural Community Council.
In welcoming guests Patricia Partridge, President of CAIW paraphrased Anthony Minghella’s Oscar acceptance speech by saying “This is a great day for the Isle of Wight.” She said Mike Bulpitt, CEO of CAIW, was committed and worked very hard. Patricia commented “We are privileged to have him at the helm.”
As the foundation stone of Riverside Centre was laid in 1988 it was observed that the centre was now in need of some improvements. In outlining the future for the new organisation, ‘Community Action IW at the Riverside ’ Mike Bulpitt said a number of areas had already been refurbished but one pressing need was for a new boiler as heating at the centre was a problem.
Mike said that it was likely that up to £100K would need to be invested in the Riverside building in the near future.
Some of the success stories of CAIW were outlined by Mike-there was community libraries at Bembridge and Brighstone and the recent re-opening of Whippingham Post Office.
Car travel via the Optio scheme went from strength to strength, but more drivers are always needed and the Scarrots Lane Bakery, part of CA Ventures was a major success with the cakes served at the launch event proving this.
Community Action IW can help any not-for-profit organisation he pointed out but the main problem for the centre was the vexed problem of on-site parking.