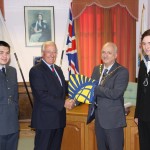 For the first time, local authorities and civic dignitaries, community groups and charities throughout the British Isles are taking part in local flag raising events and ceremonies of dedication to mark Commonwealth Day on 10th March.

This new initiative enables people to express their commitment to the Commonwealth, and show an appreciation of the values it stands for, and the opportunities offered to its citizens around the world.

Martin White added: “This is a very important day for the Commonwealth and it is very good to see the people of the Isle of Wight supporting this day”

Commonwealth Flags will also be flown at many locations of special significance including the four capital cities of the United Kingdom, Land’s End; St. David’s Pembrokeshire; Carlisle, the northernmost city in England; Lowestoft, the easternmost town in England; and Unst in the Shetland Islands.
Flags will also be raised at the Rothera Research Station on the Antarctic Peninsula, and at the Halley VI Research Station on the Brunt Ice Shelf, as well as King Edward Point and Bird Island in South Georgia.